While making a cake, you need to create the batter, the filling, and the icing. You can explain how to make them all in a single text, but that will definitely become messy. Instead, it’s common to separate each part in its own section and later explain how to merge them all together.

Now let’s say you have a different cake built the same way, only changing the icing. By having those sections separated, you can easily reuse the batter and filling sections and only add the new icing piece.

Similarly, in programming, those are precisely the main usages for methods: Code reuse and Organization.

Methods are a named set of instructions that can be invoked throughout your application, thus making it reusable and organized, as you won’t have to go through all instructions in the method to understand what it does; its name will tell you.

Conceptually, Functions and Methods are slightly different things, but they are frequently used interchangeably. For the sake of simplicity, let's assume they are the same thing for now.

Calling a method is pretty straightforward, and you have actually seen it done before. Recall the example we used on the Advanced Math topic in Chapter 1:

Sqrt and Abs are methods being called. The anatomy of a method is usually like this:

The method's owner is usually a class or an instance of a class (More on that in later chapters), and a method can have as many parameters (sometimes called arguments) as it needs, including no arguments at all.

Some more examples of methods:

// This will print a message on your Unity console.
Debug.Log("Use this to help debugging your project");

// This will move your unity gameObject in space
// Uses 3 parameters that should be separated by a comma ","
float zVelocity = 1.0f;
transform.Translate(0, 0.3f, zVelocity);

// This will unparent all children of the gameObject
// Notice how no parameters are passed
transform.DetachChildren();

If you look at the Sqrt and Abs calls again, you will notice that we assign the call result to the variables myFloatA and myFloatB. Like a math function, methods can take values as input and return an output.

Not all methods return a value, much like not all methods need parameters (input). Usually, a method without an output has internal side effects, like when we call Debug.Log, we don’t want any value back. We want the effect of having something written on the console.

Some more examples of methods with output:

// Gets a reference to the Transform component in a child of that object
// More on what are these references later 🙂
Transform child = transform.GetChild(1);

// Gets a reference to the a child Transform component that is called “Gun”
Transform gunTransform = transform.Find(“Gun”);

So far, we’ve been calling only prebuilt methods from the Unity Engine, but to create a game, you will need a lot of custom methods. Methods mostly follow this structure:

The access Modifier will be covered in depth later. For now, let’s just use “public”, meaning everyone can use it.

Data Types were covered in Lesson 1, but you will need to learn one extra: void. It means no data, and we will use it when the method has no output.

The MethodName follows the same rules as variable names, but in programming, in general, it is common to follow a Code Style Guide. For C#, methods are written in PascalCase, meaning the name starts with an uppercase letter, and each word following begins with an uppercase as well.

The body of your method goes inside the curly braces “{ }”. Every time the method is called, the instructions on the body will be executed, following the control flow inside of it.

Remember how methods can take input? It does so through parameters or arguments as we’ve already seen before:

The method Translate is being called using 3 parameters: 0, 0.3, and 1.0 (As zVelocity currently holds that value).

When defining a method, we don’t know what values will be provided when it is called somewhere else on the code. However, we do now what we intend to do with them and what kind of data we will deal with (Data Types).

Defining a parameter is like defining a variable, you give it a Data Type and a name, and you are done, that new variable can be used in your new method.

This example declares a method with one argument, an “int damageDone” variable, which is later used within the method in the Debug.Log method call.

Calling that method like this, would set damageDone to 2 and reason to “Knife hits the Head”.

The parameters declared in a method can only be used inside the body of that same method. The same goes for variables declared inside the method, which is delimited by the curly braces “{ }”.

Doing something like this would raise this error in the Unity console: “error CS0103: The name 'damageDone' does not exist in the current context“.

This error is related to the scope of variables, a concept we will discuss later as we need to develop some other concepts beforehand. For now, know that you can only use a method argument inside its function.

Now that we have covered input, the only thing remaining is the output. How can we return the results of whatever logic and calculations performed by the method?

Like with the input, we don’t know beforehand the results that the method will produce, but we know what kind of output we are expecting, that is, the Data Type of the result.

Apart from defining the Data Type of the output, a method must also define what is the output during its execution. That is done using a special statement “return”:

In the example above we start by defining the return type with: “public float Lerp …”. Previously all our methods had no output because they were all using a void return type.

Next, we have the return statement: “return lerpResult;”, which will get the value currently on the lerpResult variable and output this wherever the method was called. You don’t need to always return a variable, the following is also possible:

The return keyword will immediately stop the execution of the method, and return the provided value back to where it was called.

Since the method has a void return type, the return statement is used without any return value, but it is still useful when you want to halt a method's execution.

You might have come across this already, but some methods can be called in multiple ways.

// Creates a message on the Unity Console
Debug.Log("Hey Listen!");

// Creates a message on the Unity Console, that when clicked highlights the object that sent it in the hierarchy window
Debug.Log("Things are on fire yo!", gameObject);

This is called method overloading. Each different “version” or overload share the same name, but differ in the number of parameters or their Data Types. Overloading is really useful if you want a different behaviour depending on the input, or just to simplify its usage.

Coming up next!
Next week we’ll take a look at Arrays and Loops. Now that we know how to organize and reuse our code, it’s time to understand how to process a large number of elements. 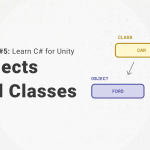 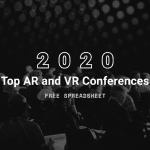