C# for Unity — Lesson #7: Integrate Your Code into Unity

You've come far young padawan, and it's time for some hands-on programming.

Inspired by the classic Cookie Clicker, in our project, we'll be collecting muffins instead (not very original, I know. Bare with me.)

Check the playable game, download the source (GitHub) and let's get crackin'! 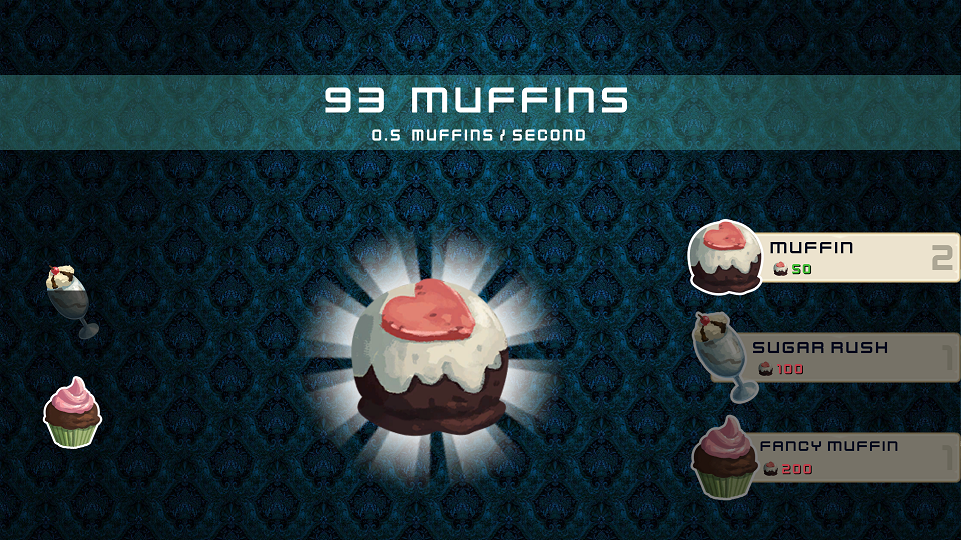 By the way, we build this game during our C# Scripting Fundamentals course which you can take it as itself or as a complementary asset if you enroll in the XR Development with Unity course.

The idea of this post is to give you an overview of a fully built project, so you can have a clearer understanding of how it all comes together. The first good step is to understand what classes exist in the project, how they relate to each other, and what is their purpose.

Most times you will have to do this by looking through the code itself and building this mental map by yourself. Sometimes though, there is some documentation 🙂

UML stands for Unified Modeling Language and is intended to provide a standard way to visualize the design of a system. What I am using here is something loosely inspired by UML, and that is why I added some subtitles to describe what each node means ;).

The arrows are following the UML standard: 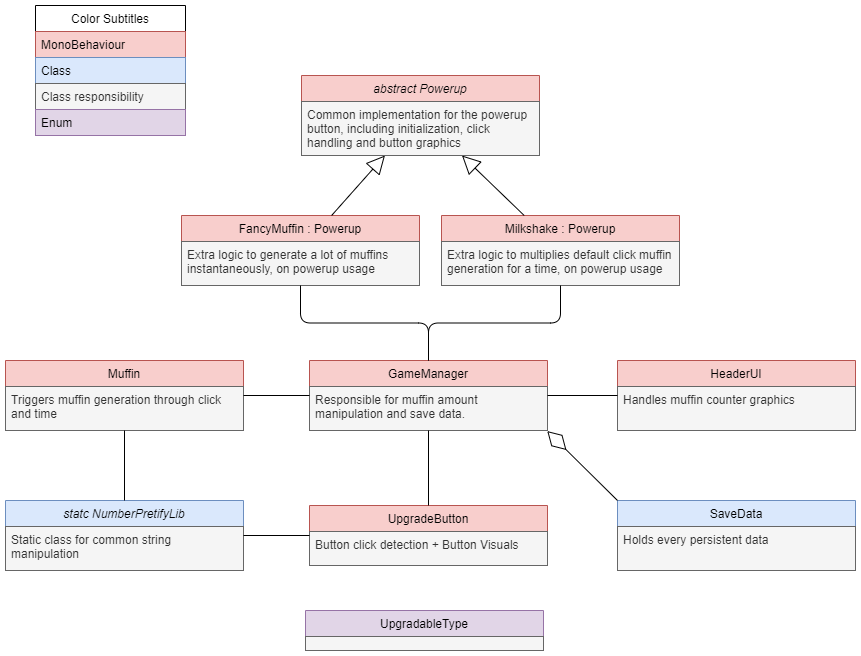 The main takeaways here are:

MonoBehaviours are the bread and butter of Unity programming, as they are necessary to create custom components that are added to game objects. You use it by making a class inherit from MonoBehaviour, and voilà you created a new component.

This style of programming is called Components-based development. For now, this shouldn't matter as much, but in time as you become more familiar with programming and designing systems, you will see that there are plenty of ways to tackle a problem, and how these different approaches affect your work.

If you create a new script through Unity, it will automatically create a class with the same name as the file name you gave it, and make it a MonoBehaviour. It is very important to keep the class name identical to the filename, otherwise, your component won't be visible in unity, even though it compiles!

Apart from becoming a usable component, MonoBehaviours gives a bunch of functionality to your class:

Some of these Unity Messages are common to use. Some of them are automatically added to your class when you create them through Unity. It is really important to know them, when they are executed, and what's their purpose.

Awake function is called when the script instance is being loaded, that is, when a Scene loads, or when an inactive GameObject is set to active, or after a GameObject created with Object. Instantiate is initialized.

Use it to initialize variables or states before the application starts.

The Start is called on the frame when a script is enabled just before any of the Update methods are called the first time.

Like the Awake function, Start is called exactly once in the lifetime of the script. However, Awake is called when the script object is initialized, regardless of whether or not the script is enabled.

Use it to initialize variables or states before the application starts.

The Update is called every frame if the MonoBehaviour is enabled.

Use it to implement your game logic, like checking if the cooldown time of a power-up was reached. The Update is the most commonly used function to implement any kind of game script.

Fixed Update is a frame-rate independent method commonly used for physics calculations. It has the same frequency as the physics system, which can be found at Edit > Settings > Time > Fixed Timestep.

Use FixedUpdate when dealing with Rigidbodies.

There are examples of data types all across the classes, which is expected. Let's take a look at the Muffin class so you can get an idea of how many variables a class can end up with! 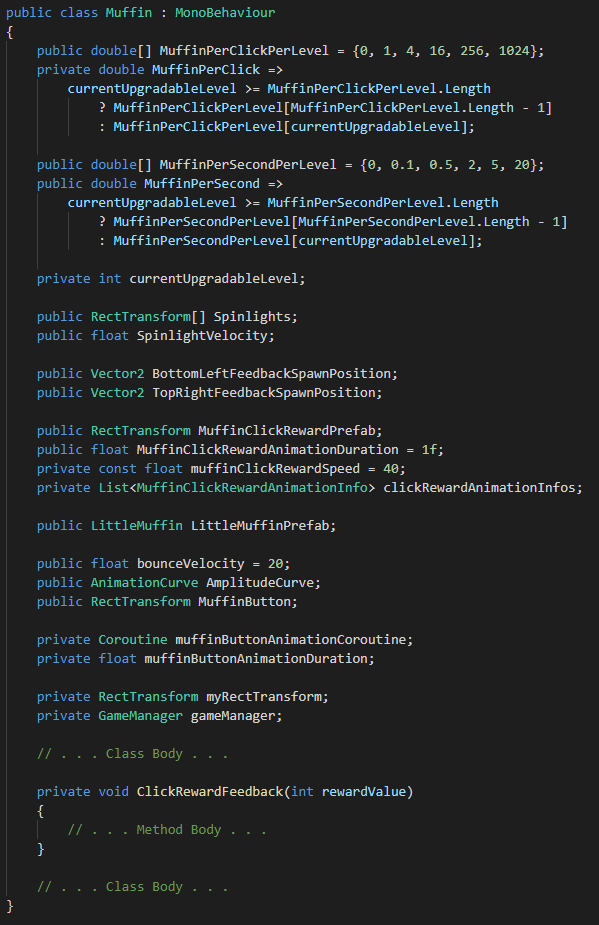 In this example, we can see how variables, properties, and methods use data types. While some of them should be familiar like int and float, there are many new ones here! Most of them are custom Unity types, the main ones to learn from here are:

A new foe has appeared! Enums!!

Enum is a set of named constants. 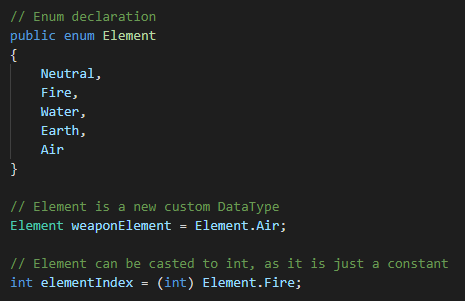 The main purpose of enums is readability, as it is way better to understand "WeekDay.Monday" than "WeekDays[0]" or something like that, especially when each culture starts counting from a different day. Unity has a custom inspector field for enums.

The UpgradableType is an example of enums in the project.

I selected a couple of functions with some good examples of Conditionals. 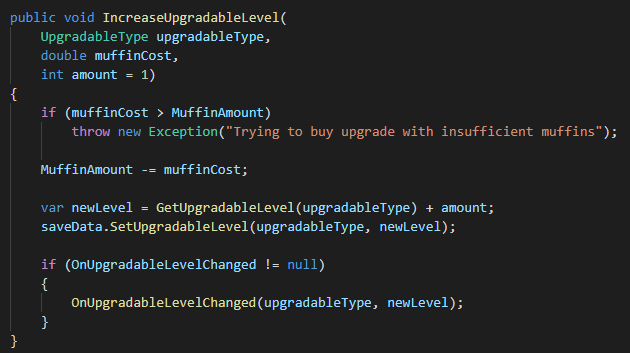 This function shows 2 different boolean expressions and a new way to use if statements. If you look closely, the first if statement doesn't use the curly brackets "{}" to define its body. When this happens the next statement will be considered the if statements body, no matter the indentation! (C# always ignores whitespaces)

It is your first time seeing an Exception as well. Throwing an exception is something that can be done when there's a possibility the code execution enters an unwanted, unsafe path and you want to stop the thread from executing further to prevent further damage. Ultimately it will also log the error to the Unity Console. 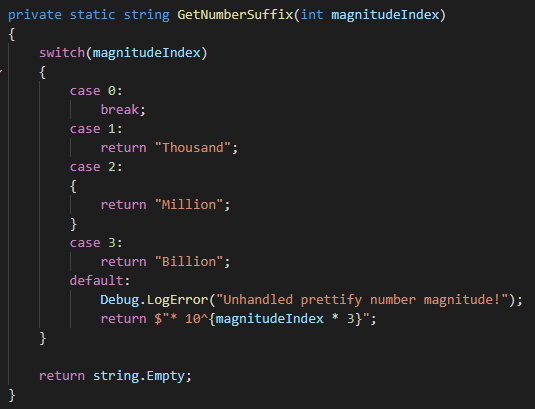 This example is a straightforward use of the switch statement but showcases the many syntaxes possible for it.

Again, examples of functions can be found all over the project, but here is some interesting one: 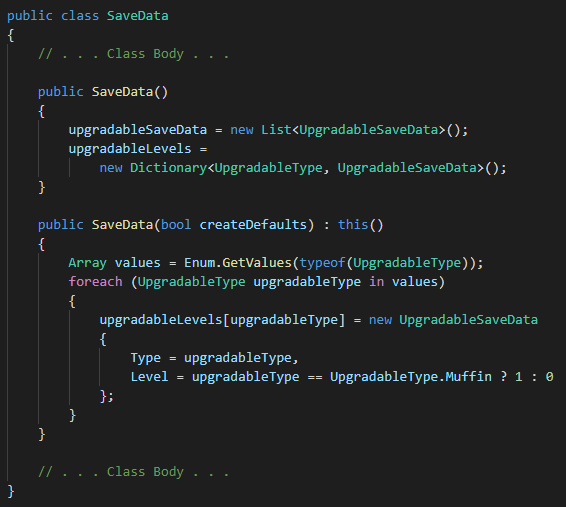 In this example, we have the SaveData constructor method with overloads. Just as a reminder, this is the anatomy of a method:

But you might be wondering, what is that ": this()" doing there?!

A constructor can invoke another constructor in the same object by using the "this" keyword. It can be used with or without parameters, and any parameters in the constructor are available as parameters to "this", or as part of an expression.

Similarly, you can invoke the constructor of a BaseClass by using the "base" keyword, just like the "this" was used here.

This is an example snippet from the Muffin class: 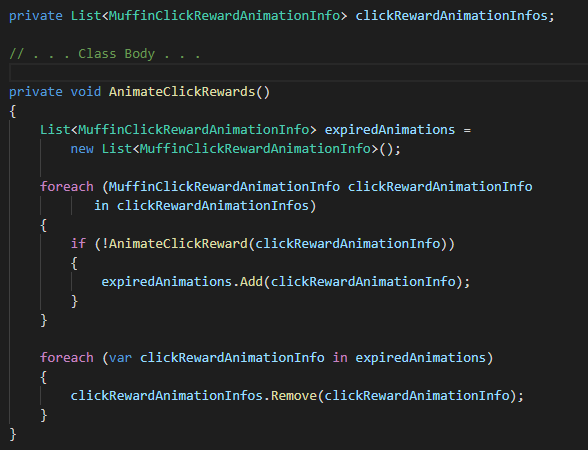 Here we see the aforementioned List class, which works like an array, but as you can see, it has an Add and Remove method, these are some of the extra functionality a List provides.

Some more example of loop usages:

As discussed earlier, every component script used by Unity must inherit from MonoBehaviours, and what this entails.

But, as seen before on the UML chart, the Powerup class is another example of inheritance. 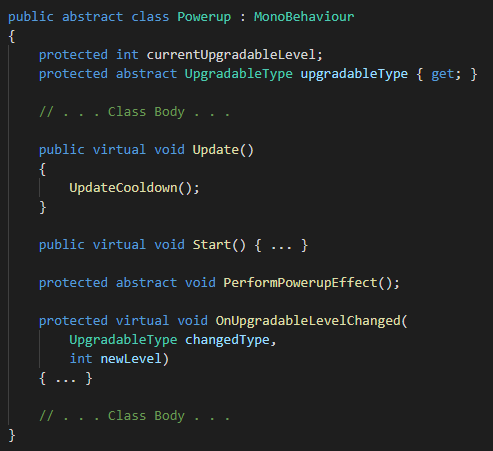 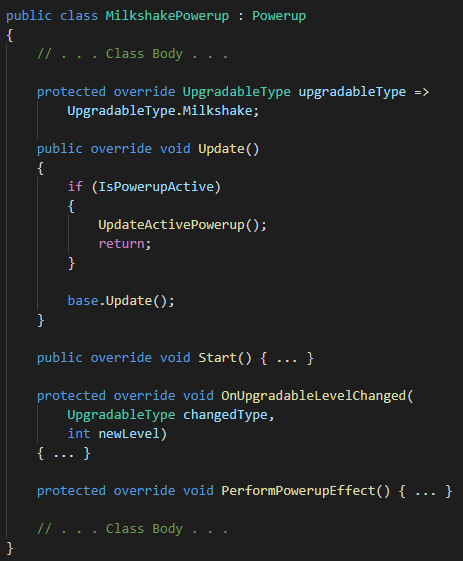 These classes pack a lot of inheritance material, it covers all the inheritance concepts taught in the previous chapter:

Serialization is the process of transforming data structures or object states into a format that can be stored and reconstructed later. The reverse process is called deserialization.

In this project, the class SaveData is serialized before being saved in the PlayerPrefs.
To accomplish this, it uses the JsonUtility class to serialize and deserialize its fields to a format called JSON.

JsonUtility can only work on serializable classes, so the SaveData class must be tagged with the class attribute Serializable.

The class GameManager is an example of a Singleton. Since there should always be only one instance of a GameManager, and it is accessed all over the application, as we can see through the UML chart, it makes sense to turn it into a Singleton.

Creating a Singleton is simple, this is a snippet extracted from the GameManager class, that implements the Singleton pattern: 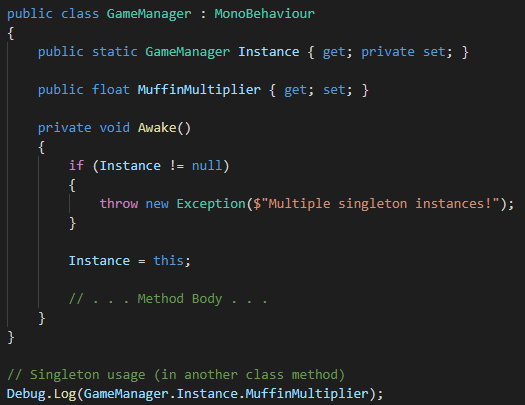 To use the singleton just go "GameManager.Instance", this can be found in the FancyMuffinPowerup, HeaderUI, MilkshakePowerup, Muffin, Powerup, and UpgradeButton classes, like I said, it is used all over 🙂

It is important to know that different implementations also guarantee a single instance and global access.

When you call a function, it runs to completion before returning. This effectively means that any action taking place in a function must happen within a single frame update; a function call can’t be used to contain a procedural animation or a sequence of events over time, for example.

A coroutine is like a function that can pause execution and return control to Unity but then continue where it left off. 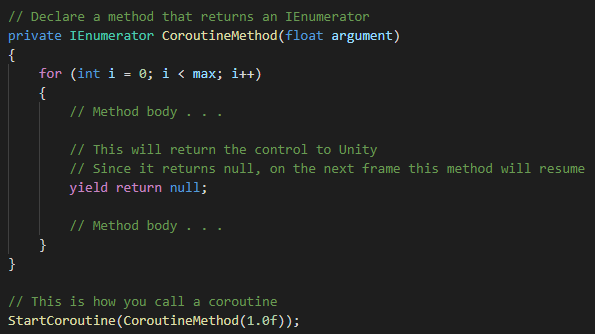 Make sure that your method returns IEnumerator, and has at least one yield statement.
There are different ways to call the yield statement, depending on if you want the method to resume the next frame, after X time, or after another coroutine finishes.

PlayerPrefs are the way Unity handles persistence in the applications, providing simple functions like:

It is common to use third-party persistence solutions, like more established databases such as SQL.

Some example usages can be found at the functions:

Unity provides some static classes that fall into those good use cases mentioned earlier:

Mathf is a library of mathematical functions covering a wide range of expressions: 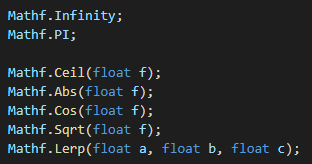 These functions use only the arguments provided through the method and don't rely on any previous state for its logic, making them pure functions, good use of static as discussed in lesson 5.

Some example usages can be found at the functions:

The class Time is another good example of static classes, it provides a bunch of properties to get time information from Unity:

Some example usages can be found at the functions:
Muffin.Update
LittleMuffin.UpdateTransform

This example game is made entirely on top of the Unity UI System. Unfortunately, since these blog posts are focused on C#, I won't cover this. My advice is to take a look at how the MuffinClickerScene is set up, play around with the UI in a different test scene and look up some tutorials on the net.

The main concepts to master are:

Make sure that you are using a good IDE (Integrated development environment) software with all its capabilities working, the most important ones being Intellisense and Debug features (Breakpoints, flow control, ...).

Visual Studio 2019 is already a great free tool, and I also recommend Rider.

Git is a version control system, meaning it will keep the history of your changes and allow you to better work collaboratively. This allows you to work without being concerned about breaking your project as you will always have the git commits to revert to.

Git is extensively used across all different development environments, and Unity is not an exception. Learning git is good whether you intend to keep working with unity or not.

This project is an example of the many features C# has to offer, and how to use them with Unity, but it was done incrementally, and this can be seen through the git commits of the project. 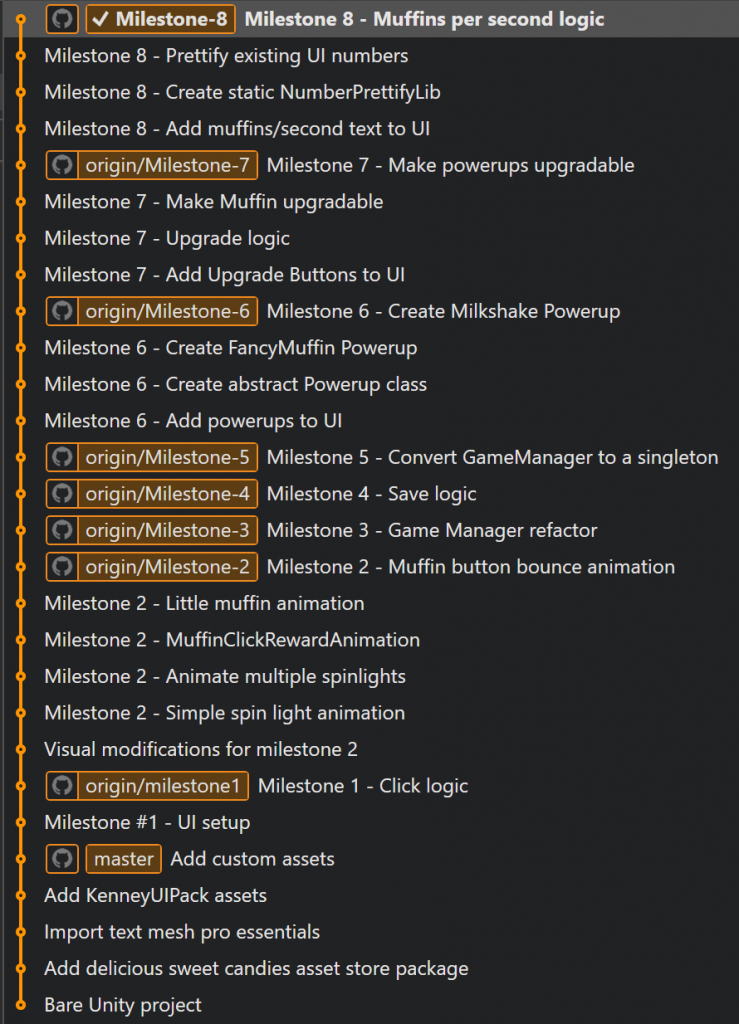 The milestones are there because they are a base for our C# Scripting Fundamentals in Unity, but they show clearly how each feature was tackled step by step.

Go slowly, take this project and add some new features, maybe a new powerup. Or start a new one, but isolate only the core mechanic you want to make, and focus only on that.

By know you should be familiar with the fundamental use of C#. Congratulations!

Get the XR Development Program

Should Meta Quest Pro Become Your Next Headset?

Should Meta Quest Pro Become Your Next Headset?