What Does HoloLens 2 Offer to Enterprises?

In the meantime, we learned quite a bit about the headset that strives to be the best mixed reality (MR) solution for enterprises. Microsoft is not a new player in the MR arena. Their first HoloLens model has been out there for more than 3 years and it is exciting to see what the company has learned and how they’ve incorporated their user feedback into the new headset. But did they succeed in developing a game-changer for enterprises?

Let’s take a look at what exactly HoloLens 2 is bringing to the holographic table.

The first thing you do with a headset is put it on your head. Simple enough, right? Except that the original HoloLens had to be put on in a specific, non-intuitive way. Once it was on the user’s head, it felt like a heavy headlamp. It gave the immediate impression that MR is not there yet.

HoloLens 2 makes a much better first impression. Putting is on is as natural as putting on a hat and the weight is now distributed between the front and the back of the device. The strain on the neck is reduced and therefore the users can wear the device for multiple hours. Before they were recommended to take a break after just an hour or two. The headset feels much more stable and comfortable. 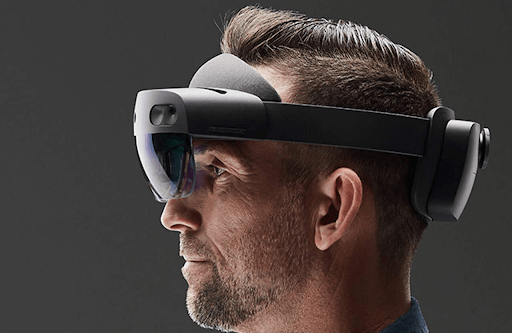 As Jordan Higgins, head of the immersive experience at the Arlington, puts it: “It's an evolutionary step in comfort with a near 50/50 weight distribution that makes it more comfortable for longer periods of time which, with our work in immersive training, will mean longer sessions and more results.”

HoloLens 2 nearly doubles the field of view going from a 32-degrees diagonal to a 52-degrees diagonal while maintaining the industry-leading holographic density of 47 pixels per degree of sight. With the increased resolution (up to 2048 x 1080 per eye) it offers a much more immersive experience. While digital graphics might still disappear a bit earlier than users would like, keeping them in sight doesn’t feel like a chore anymore. 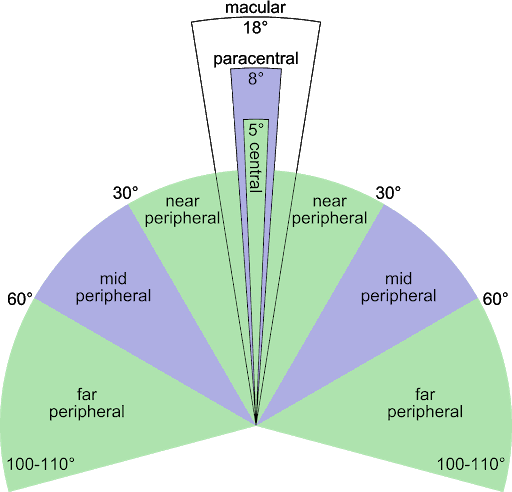 Another big quality-of-life improvement is that HoloLens 2 can be worn over glasses. Its features work seamlessly even when the user is wearing thick glass lenses. This is huge for plenty of users in HoloLens’ target industries.

Compared to its predecessor, the first impression of HoloLens 2 is much better. It feels like a useful tool right off the bat and this will certainly help with internal buy-in when trying out the device in various industries.

The first HoloLens required its users to learn a specific pinch movement to interact with holograms. That’s not the case with its successor.

Microsoft went through years of customer behavior studies and implemented the most common movements and interactions. The result is a truly intuitive UX with natural ways of interacting with holograms. It’s easy to pick things up with one or two hands, push buttons or scale and rotate. With more ways to interact with objects, using HoloLens 2 starts to feel more instinctive. 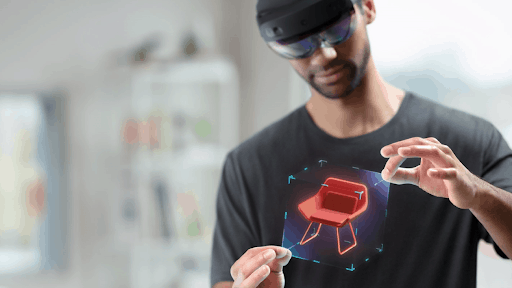 This wouldn’t be possible without enhanced hand and eye tracking, which is crucial for HoloLens 2 to establish a role in industries like engineering, manufacturing and healthcare.

The headset recognizes up to 25 points of articulation per hand through the wrist and fingers. It also recognizes the direction of palms, finger-bending and various hand motions. The full-fledged gesture tracking allows users to drag and pick up objects or pull up menus by tapping a holographic button on their wrist. This flexibility opens up a new range of app options. 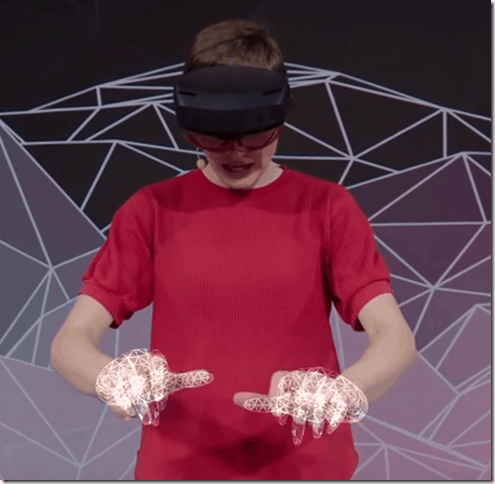 When it comes to eye tracking, the device accurately picks out an object about the size of a grapefruit from a closely-grouped array 6 feet away. Then the user can pop the object with a voice command.

Eye tracking also does a good job of recognizing reading speed and adjusts the scrolling of the text accordingly. This should speed up plenty of tasks where employees benefit from accessing information while their hands are engaged.

Microsoft is aware that HoloLens’ success hinges on the applications and software it provides for businesses.

Even Microsoft’s CEO Satya Nadella said, that the breakthrough computing advances will come from the company's partners and customers using the software giant's services as building blocks.

Following this philosophy, Microsoft has decided to offer an open system with HoloLens 2 and support open standards (like OpenXR) which are designed to make cross-platform spatial computing more user and developer-friendly.

The intent here is clear - Microsoft is hoping that many developers will create applications for the headset, increasing its interest and usefulness in the eyes of potential new users.

In order to accelerate this process, the company has already connected with 148 partners (at the time of writing) that will help users with their digital MR transformation. 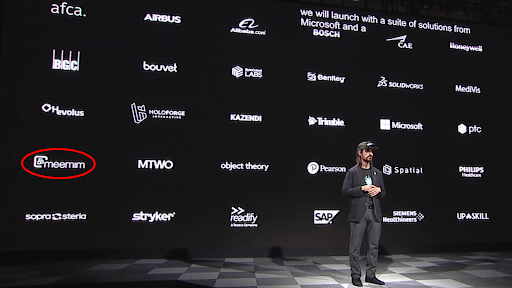 A good example of an application developed by a third party is a video conferencing and collaboration software developed by Spatial. This application makes it feel as if you are in the same room with people who are not there. It’s a very practical tool for all enterprises that operate at more than one location. 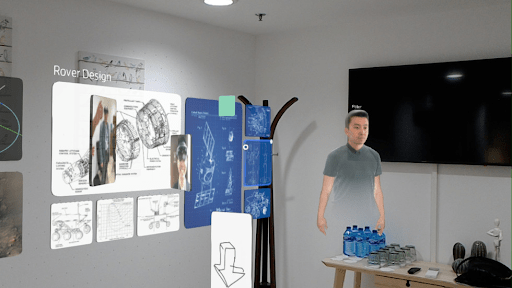 Of course, open system doesn’t mean that HoloLens 2 won’t come with its own batch of HoloLens applications and software.

Dynamics 365 for a dynamic device

Dynamics 365 aspires to be an app ecosystem for MR similar to what Office 365 is for PCs. The three Dynamics 365 apps that will be available with HoloLens 2 from the get-go are Guides, Layout and Remote Assist.

Guides allow users to create and follow step-by-step MR guides. Instructions will float in front of the user making it extremely easy to follow them and complete even complicated tasks without checking the manual or seeking additional help.

This method of work has proven successful at Boeing where employees have been using HoloLens 1 to perform a complex task of wiring an airplane. HoloLens reduces workers’ cognitive load and helps them complete the assignment faster.

With the simplicity of Guides for HoloLens 2 such MR guides will be able to help workers across a wide range of industries. 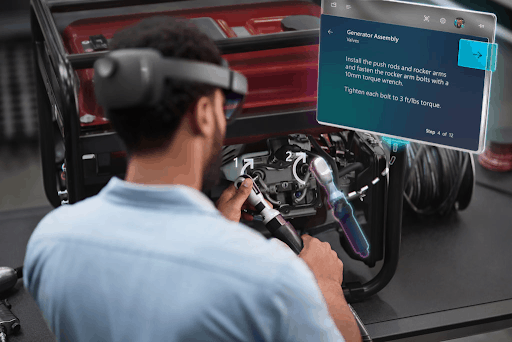 The Layout application allows users to not only create holograms but leave them at a certain place in the mapped building and keep them there. This is especially useful for construction sites where users will be able to leave blueprints and diagrams for others to see at crucial places. It will also enable development teams to have a creative meeting and leave everything they come up with in the room to revisit later.

Remote Assist turns HoloLens 2 into a verification tool. As the oil giant Chevros has demonstrated, Remote Assist allows companies to address issues quickly on the front lines without paying for travel and makes for safer operations at potentially hazardous sites. Chevron inspectors are able to conduct remote inspections, identifying problems and approving changes through a first-line worker’s HoloLens. 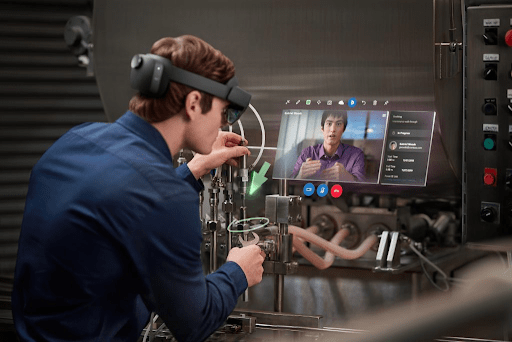 Azure and Unity for more power and streamlined development

HoloLens 2 is integrated with Microsoft Azure cloud service and one of the initial pricing options comes with $500 of Azure Credit. Azure will enhance the capabilities of the headset, especially when it comes to rendering. As Greg Fields, Myplanet’s managing director, said:

“The new HoloLens 2, with Azure Cloud, promises to give teams crazy high-resolution renders of 3D versions of products that teams can collaborate on building, all before a product is physically produced. This technology could, sincerely, allow teams to decrease time and cost of building and testing products, allowing everyone to be lean and agile.”

It's important to keep in mind that many of Microsoft’s customers work with enormous datasets - some of them can reach up to 100,000,000 polygons. Remote Rendering enables the heavy rendering to be done in the cloud and then streamed to the headset. This allows for much higher graphics than the internal low-power GPU can handle. 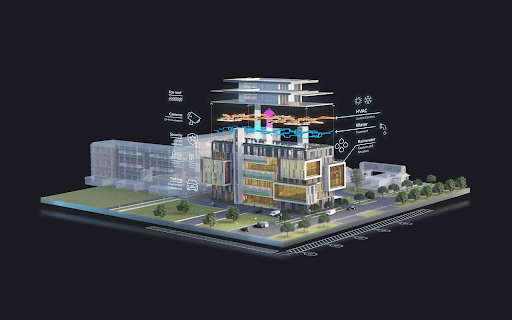 Azure also enables Spatial Anchors that allow users to preload models to specific locations, along with navigation cues. Engineers working on-site can have their models loaded automatically when they reach the equipment they're inspecting, and when done, they can be guided to their next stop. Spatial Anchors also work with phones and tablets that can serve as a window into HoloLens’ mixed reality.

The same pricing option that comes with Azure credits also gives users access to a 3-month free trial of both Unity Pro and the PiXYZ Plugin.

Tim McDonough, general manager of Industrial, Unity, tells us what this means:

“Pairing HoloLens 2 with Unity’s real-time 3D platform enables industrial businesses to create immersive, interactive experiences that accelerate business and reduce costs. The addition of Unity Pro and the PiXYZ Plugin makes it easy to import 3D design data in minutes rather than hours.”

The combination enables the use of Computer Aided Drawing (CAD) and Building Information Management (BIM) design data to create mixed-reality applications for businesses that accelerate workflows and reduce costs.

What benefits should enterprises expect from HoloLens 2?

HoloLens 2 is not a cheap device. It comes at $3,500. So what kind of ROI should businesses expect from it?

Companies where employees often travel to various meetings or field inspections will quickly save time and money with the help of the new headset.

Eric Hembree, Ingram Micro's director of IoT, says that time and resources will also be saved if the company needs to train new employees.

"Instead of spending time training new maintenance workers, they can arm them with the HoloLens 2 to and allow them to go on-site using guides that are pre-programmed for those specific environments, whether it be the HVAC system, the water heater system. They can naturally teach themselves without having an extra body there taking them away from other important projects."

And as Ford has shown, HoloLens allows a company to reduce their time to market by letting them evaluate design changes much quicker, allowing for more creativity and making it easier to collaborate with colleagues on all sides of the business. 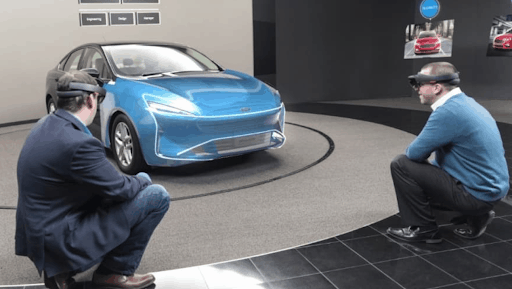 Microsoft has certainly learned from their first HoloLens headset. While HoloLens 2 is an improvement across the board, it also shows Microsoft has doubled-down on its most successful use cases in order to establish a strong role in certain industries. While HoloLens 2 has potential in a variety of settings, it should truly shine in engineering, construction, manufacturing, healthcare, learning and similar industries.

If your company is planning to use HoloLens 2, take a look at the Circuit Stream Platform. It was created to help businesses take full advantage of MR tools like the new headset. The platform provides everything you need to scale, analyze and streamline Cross Reality solutions. You can signup for a private Circuit Stream Platform Demo here.