In VR/AR, occlusion happens when a 3D object blocks the view of another 3D object. Occlusion gives your virtual space a feeling of depth and immersion. Today, we’re going to cover how you can use occlusion as a tool within your own application.

Many of the examples we’ll list use AR, but the following C# code and tips can apply to any 3D app. Our main example is of an X-ray tool showing the bones underneath the skin:

Three objects are involved in this process. In the example above, we have the X-ray tool, the skin layer, and the bone layer. Each will need its own unique script.

Make sense? Then let’s dive in!

Step 1: The Object Blocking The View

The object blocking the view in our example is the X-ray tool. It will need to be invisible in order to see objects behind it, so we’ll need to add an invisible mask to it.

You’ll need to make a new surface shader and title it “InvisibleMask.” Then, add in the following:

The next bit of script including ‘Blend Zero One’ makes the object invisible; it literally tells your app to render the object as nothing:

Great! This process should have looked something like this:

Open up the surface shader, delete all existing code, and input our new code:

Now we’ll create a new Material, title it “InvisibleMaskMat,” and apply this surface shader to it:

Now whatever object you apply this Material to will become invisible.

Step 2: The Object Blocked In The View

As explained above, we have three objects in our example: the X-ray tool, the skin, and the bones. We’ve configured our ‘X-ray tool’ object to be invisible (so we can see objects behind it) and to only show objects that are considered opaque.

At this point, all objects should be seen from behind your invisible object. Next, we’ll add the following script to the object you want to be blocked (and therefore not seen) – in our case, the ‘skin.’

Let’s make a new C# script, title it ‘XRayTool,' and add some code:

The lines after the void Start line identify the object’s mesh render:

This next line queues the object’s render order at 3002.

Let’s add our XRayTool script to our ‘skin’ (or whatever object you want to turn invisible to see behind) and you are good to go!

Step 2.5: Does The Object Blocked In The View Have Children?

We’ll need to alter our script a bit if your object you want blocked has children associated with it, and you want this blocking effect applied to the children as well. We’ll start off with this:

Now, to ensure the occlusion effect and delayed rendering applies to the object and its children, include the next few lines:

And then, we’ll delay the object and its children’s point in the rendering queue. In the script we’ve included notes for the other objects’ rendering times:

Make sure you apply these two individual scripts to your blocking object (our ‘X-ray tool’) and blocked object (our ‘skin’), and you’re good to go!

This allows multiple objects and images to be tracked.

You can use the above C# script in any coding program, and for virtual reality or augmented reality. We used it to simulate an X-ray tool, but there are many ways you can use this trick for your own app. Maybe you’ll recreate They Live (1988) in VR!

This is just a taste of what you can learn and accomplish in our online VR/AR course. Check out our syllabus to review what we’ll teach you in just 10 weeks with weekly 1:1 sessions. 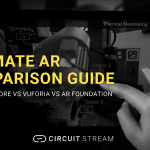 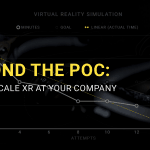 Beyond the POC: How to Scale XR at Your Company

Beyond the POC: How to Scale XR at Your Company