All You Need to Know About Oculus Link

The Oculus Quest is Oculus’s latest virtual reality headset, and perhaps the most significant one yet. It was released on May 21, 2019 as a mid-point between portable, affordable VR, and high-end PC VR. Oculus is estimated to have sold 425k Quest units in 2019, and they have further reported to have made $100 million purely through Oculus content sales as of May 2020.

Update:
In April 2021, Oculus introduced Air Link - a wireless upgrade on top of the Oculus Link feature. Which basically means you can play and interact with VR apps without a cable! More on that later on.

The one complaint developers may have had about the Quest is that due to being powered by a mobile CPU and GPU, the performance of the Quest is much lower than the Rift. This also means that developers couldn’t use the Quest to develop high-end visual experiences. This was addressed by Oculus through the Oculus Link - a system that allows you to power your Oculus Quest through your PC’s hardware. This opens up a world of opportunities for developers, and is made even better through the latest developments.

What is Oculus Quest?

Wireless, virtual, limitless - Oculus Quest is the company's all-in-one VR gaming headset. It tracks and translates your movements in the VR world without external sensors, offering a gaming experience as seamless, futuristic and immersive as ever. A haven for VR enthusiasts and excellent for potential newcomers, Oculus Quest is many things.

But one thing’s for sure - the Oculus Quest is a milestone for VR Headset development. It is the first fully-featured, mobile headset that lets you play anywhere.. The logistics are simple - it fits into all spaces big and small. The setup is easy (almost a no-brainer). And the accompanying touch controllers that recreate your hand movements with nuanced precision in the virtual world. With the Oculus Quest you should be set for experiencing and developing AR/VR content.

Why is the Oculus Link Important?

Oculus Quest is a game-changer. A gateway to bringing VR into the mainstream. It's a headset that makes VR consumer-friendly, affordable and accessible. It has decent built-in speakers and the ability to produce decent graphics. Two cameras mounted atop each side work as sensors tracking your position from inside out. The device setup is simple and intuitive. The user can play standing or sitting.

The Oculus Quest is the first standalone virtual reality headset to feature head rotation and position tracking, two 6DOF motion controllers, and hand tracking. You can simulate hand gestures like pointing and grabbing objects with the Oculus controllers. The hand tracking feature also allows you to interchangeably use your hands and the controllers. 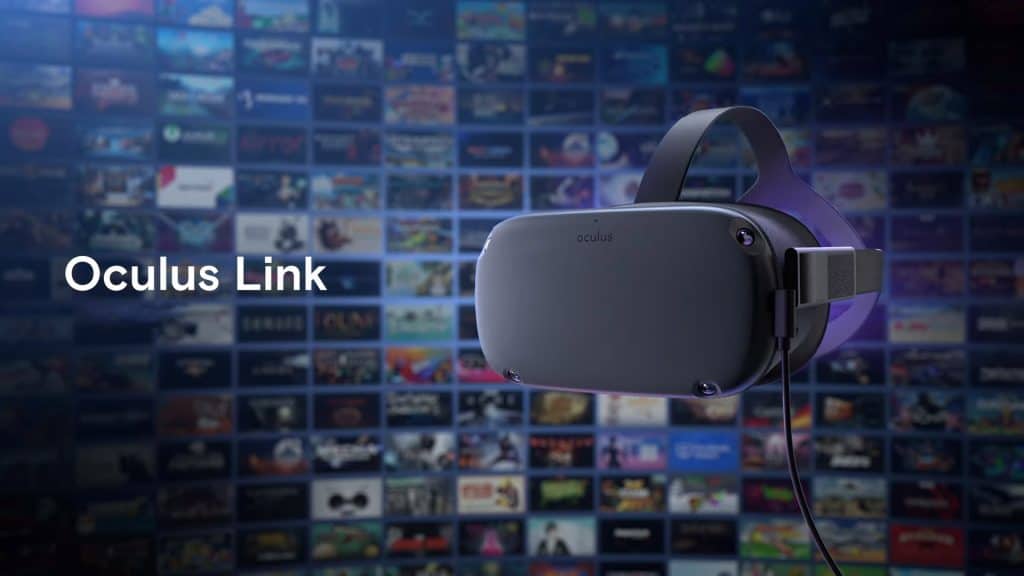 The Oculus Quest is a game-changer for two main reasons: it’s technical features and it’s standalone nature. The technical features allow it to be very close in experience to the more expensive and powerful Desktop VR Headsets. However, it does not require a PC or a PlayStation to function. The wireless, untethered nature allows for freedom of interaction that isn’t present in other VR Headsets.

The Oculus Link ties the Oculus Quest back together with the world of powerful PC VR. It addresses the one weakness of the Quest - the fact that it cannot be used to power games and experiences at the same level as the PC VR Headsets.

This allows you to enjoy the best of both worlds. You have the portability and accessibility of the Oculus Quest at hand when you need it, but you can still access the higher-end VR experiences when you want.

How to Use Oculus Link?

Oculus Link is the optic cable that connects Oculus Quest to your gaming PC. If you intend to use the Oculus Link to get your Oculus Quest to function similar to the Oculus Rift, you should ensure that your PC falls under recommended VR requirements. You will also need a supported cable - more details on that in the next section below.

Here’s a step-by-step method of how you can set up your Quest with Oculus Link:

Before you can start using Oculus Link, make sure your PC is compatible. It is recommended that you have a reasonably powerful PC, especially if you’re planning to develop applications that require more CPU and GPU power. If you have a powerful CPU and GPU that are no more than a few years old, you will most likely be okay.

Oculus is continuing with testing and development of its Oculus Link software, and has made available a list of supported hardware. This may however change in the near future.

Check out the current CPU, RAM, Operating Systems, and USB ports requirements for Oculus Link in the table below.

Currently, the graphics cards compatible with Oculus Link are:

Do you Need to buy the Oculus Link Cable?

When the Oculus link (beta) was launched in 2019, it supported only proprietary USB-C cables (3.0). This cable was needed to play Oculus Rift games. Unfortunately, that was not included with the Oculus Quest. Oculus thus designed its own 16 feet long Oculus Link cable priced at $80 which you had to buy separately. This was released after Facebook’s announcement to do so at Oculus Connect 6.

Another alternative was to buy your own USBC to USB 3.0 Cable, for example, the ones by Anker as previously recommended by Oculus.

As of May 2020, thanks to Oculus' latest update, you can use a plain USB 2.0 cable as well - including the official cable that already ships with the Oculus Quest. The separate purchase of the official link cable is therefore no longer necessary, unless you really need 6 more feet of cable for your needs.

Oculus further shared the specs of Oculus Link to help users buy cables that would match these requirements. Here are the specifications:

Now that you have a device that is

a) wireless and
b) uses hand gesture tracking,

it is now time to experience it fully. The top games that are recommended with Oculus Quest have been Beat Saber, Pro putt by Topgolf and Superhot VR. If you want to explore the gaming arcade of Oculus Quest, check this out to find out what else Oculus has to offer.

The Oculus Link software is still in the beta period. It will work with most high-quality USB cables. To begin using Oculus Link, Quest owners with a compatible gaming PC can simply plug their headset into a USB port and start playing. They can use the Oculus desktop app to browse and purchase games, given the richness of the Rift content library. This will also allow you to access features that are exclusive to the Rift - such as the Rift’s Oculus Home and the unique UI of the Oculus Rift Dashboard. 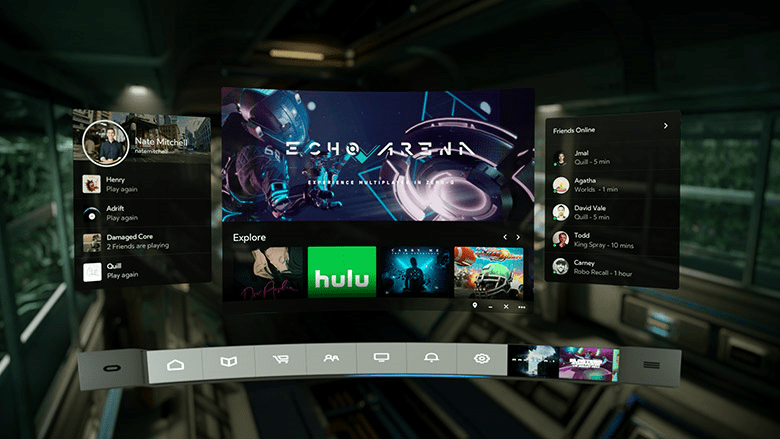 You, therefore, have an option of using untethered portability of Quest or Oculus Link’s plug and play!

What does that mean for AR/VR development?

While you could already use your Quest to develop for the Oculus Quest, you can also start developing games and apps for Oculus Rift and Rift S. Being able to simulate how your game would perform on an actual Oculus Rift is really important. Performance optimization is key in developing successful XR apps. If there are missed frames, mobile and console games may not amplify these too much, but in a VR scene, gaps in frame sequences can cause significant discomfort. This could also lead to losing a valuable user.

If you plan to develop VR for Oculus Quest or Oculus Rift, it is important to practice minimizing draw calls and shader complexity. These along with thorough frame analysis are crucial elements for your final application to function effectively.

If you were planning to develop only for the Oculus Quest, you now have the option to widen your reach to more audiences. The more mature market of the Oculus Rift will also be available to you.

What does Oculus Air Link bring to the table?

Oculus announced a substantial upgrade to their flagship headset. The version 28 software update will allow you to enable Air Link wireless feature with which you can play, test, and develop with Quest 2 without being connected to your desktop computer (or a powerful gaming laptop).

This is great, since most of the users are looking to have a better (wireless) experience. In fact, it's one of the most wished feature for Valve Index headset.

How to Setup Oculus Air Link

What's the performance with Air Link?

Since the Air Link rollout is still in beta version the experience might vary however the users reported smooth experience with the wireless feature. This might be the effect to asynchronous spacewarp (ASW 2.0) technology. Besides the cool name, the ASW takes your hardware info and smoothes out the framerate when it drops.

Just like with every other wireless feature, you will notice a slight latency issue but with ASW 2.0. With the plasticity of the human brain that perception can be adapted. If the latency is too bad to handle, this would be the sign to update your performance rig and beat the baseline of VR requirements.

Now for the bad part. The Air Link only works for Quest 2 headsets. Sorry about that Quest 1 owners — but hey that's one more reason to get one of the popular Circuit Stream bundles where you get the full course and a new Quest 2 headset.

All is not lost though - there are guides on how to make it work for Quest 1 already. Keep in mind these are unofficial, un-tested tutorials however let us know if you get it working.

What do the Oculus Quest and Oculus Link represent for the future of VR?

Quest's all-in-one wireless system represents the absolute best in the VR gaming scene. It is touted as the VR device that Facebook wanted to always develop. Free movement, motion-tracking and immersion are incredible. And everything comes at a price that doesn't break the bank. There's no doubt the Quest is a leap in the adoption of VR worldwide. It's where the future meets the present, rare meets the mainstream. With estimated sales of 425k Quest units in 2019, it’s safe to say that the Oculus Quest is growing the rate of adoption of VR technology significantly. 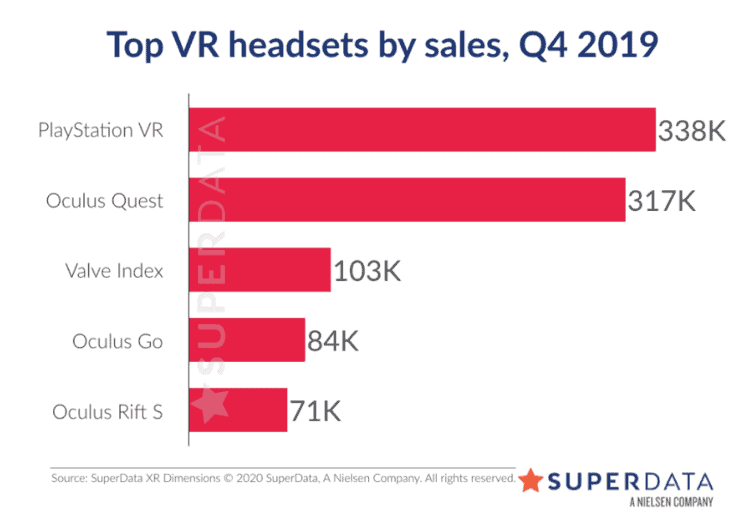 By bringing VR to consumers in an accessible and affordable way, the Oculus Quest is making VR mainstream. This, in turn, creates bigger and better opportunities for developers. It’s now much easier for developers to create VR experiences that can be enjoyed by a large market, and to profit from it as well.

The Oculus Link is the answer to the only limitation of the Oculus Quest - its lack of pure performance power. While you benefit from the Oculus Quest’s mobile hardware in the form of portability and affordability, it cannot normally match the Oculus Rift in performance.

The capabilities of the Oculus Link have been made even more accessible now that you can use a standard USB 2.0 cable - including the one that ships with the Quest. It was already a great compromise between mobile and PC VR, and the Oculus Link now comfortably links the gap between the Oculus Quest and Oculus Rift.

If this article got you excited about VR, get to know more about this technology by attending one of our free live or on-demand workshops.

We will help you take your first step in developing VR in Unity.