on February 2, 2022 Meta publicly announced that their Oculus Quest Store surpassed $1B Billion on content.  Oculus Quest (now called Meta Quest due to company's rebranding) in parallel sold around 15 million Quests since release of the headset in May of 2019. This is making in more popular than Microsoft's gaming console Xbox.

As of now, Meta Oculus Quest is the most sold standalone VR headset and the second most sold VR device overall (after Sony’s PSVR).

The reign of the original Oculus Quest is set to continue with the upcoming release of its second installment: the Oculus Quest 2.

The new headset from Facebook is lighter, faster, and more affordable than its predecessor.

With the recent cancellation of Oculus Go and Oculus Rift S production there's no doubt that Facebook decided to put most of its VR strength behind products with the Quest name.

But is the second version of Quest really worth all the hype and an all-around improvement to the series?

Oculus Quest 2 starts shipping on October 13th and is already available for a preorder.

That’s $100 cheaper than the original Quest.

Just as its predecessor, Oculus Quest 2 is a standalone VR headset that doesn't need a PC or any additional hardware to run VR applications. You can, however, connect the headset to your computer via a USB cable and run a library of Rift S applications via Oculus Link.

Below are Oculus Quest 2 hardware specifications compared to other headsets on the market: 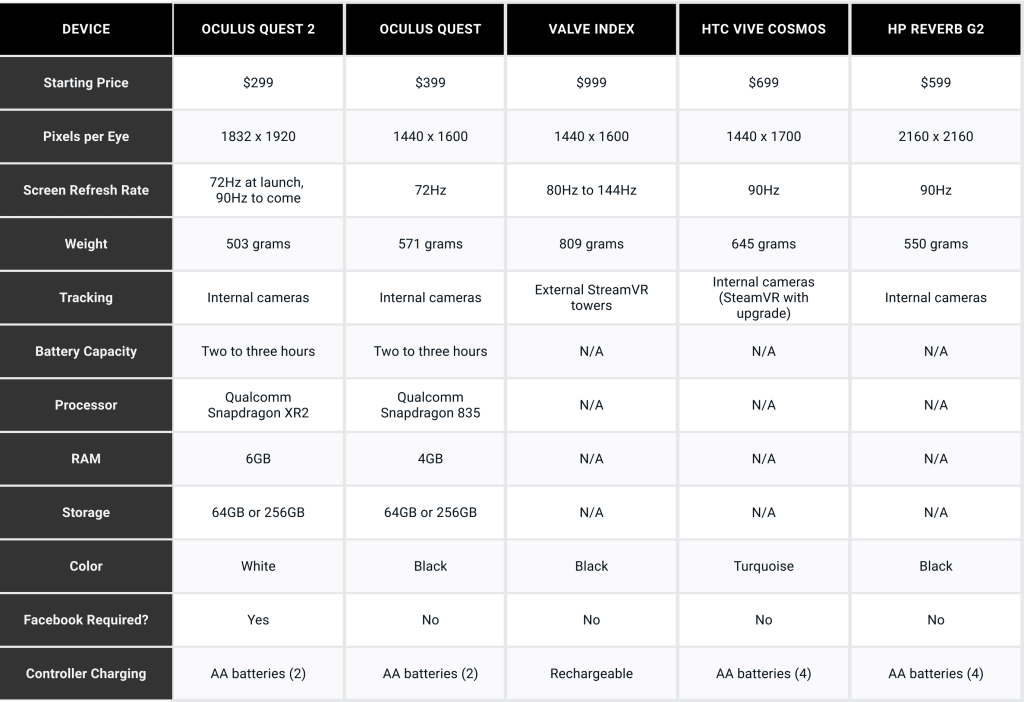 Let’s cover in detail what makes Oculus Quest 2 an overall improvement to the line.

The two most noticeable improvements in the visual department for Oculus Quest 2 compared to the original headset are increased resolution and frame rate.

The Quest 2 features a fast-switching LCD display with 1832x1920 (3.5 megapixels) per eye, which means the next-gen installment of the device has around 50% more pixels than the two 1440x1600 (2,3 megapixels) OLED panels on the original Quest. 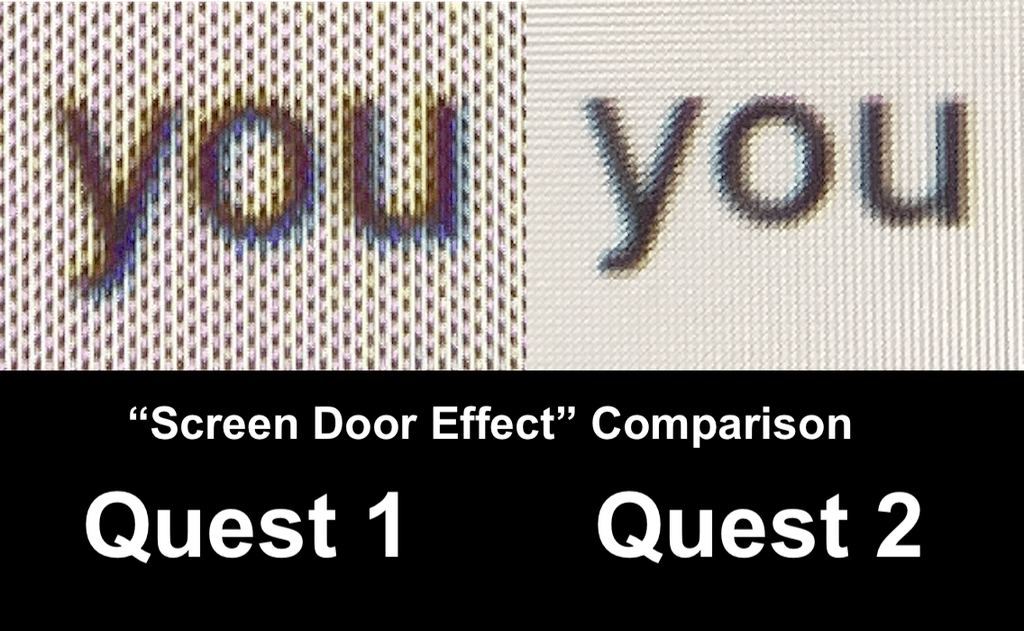 The refresh rate for Quest 2 is set to reach 90 Hz sometime after the launch. Although the 25 percent increase in frame rate allows for a more realistic VR experience and less eye fatigue, at the time of launch the headset will run applications at the same 72Hz as its predecessor. The exception will be the main menu which supports experimental 90Hz mode. The full 90Hz support will be added later.

With Oculus Quest 2 there are three adjustment positions for the distance between lenses -- 58mm, 63mm, 68mm -- so that you can adjust the lenses for your IPD (Interpupillary distance, which is measured in millimeters between the centers of your eyes’ pupils). 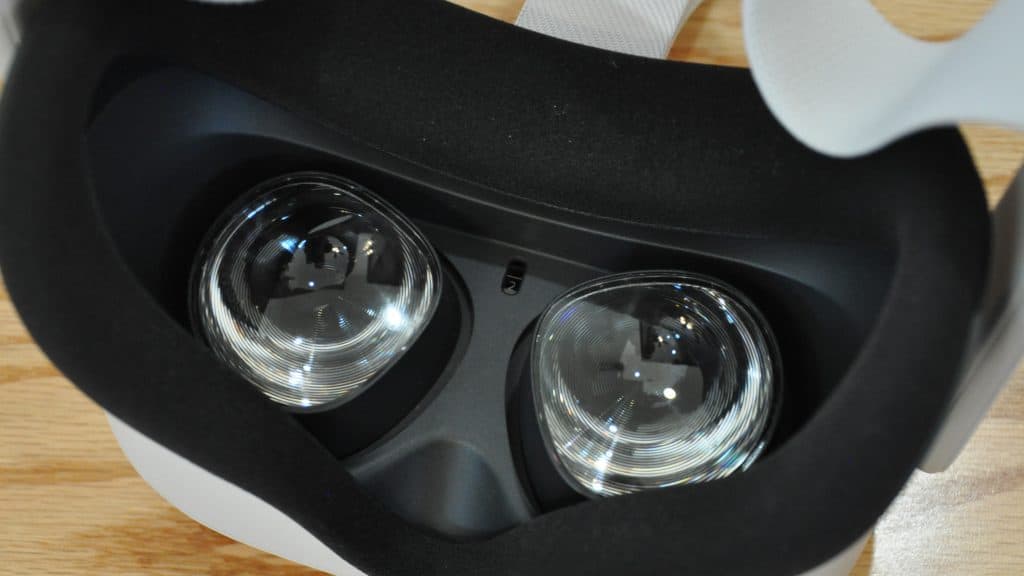 In addition to physically moving the lenses Oculus Quest 2 also digitally alters which pixels light up for every chosen IPD mode. If you are using the headset at the widest IPD setting you may notice minor clipping of the field of view -- one of the shortcomings of single display design.

Facebook hasn’t provided any official data on the second Quest’s field of view (FOV), but it’s expected to be close to the original’s 110 degrees. Quest 2 also sports the same high-quality fresnel lenses.

Oculus Quest 2 has integrated speakers that hover over your ears while being attached to the headband. This positioning contributes to the spatial audio effect, although the poor alignment with ears renders the audio quality as average compared to the more expensive Valve Index and HTC headsets.

The sound is a bit louder compared to the first Oculus Quest. Overall the sound quality is nice, especially given the low-price of the headset.

There’s a 3.5 mm audio jack on the side so that you can use your own headphones if you prefer. Certain companies, such as Logitech, are already developing audio solutions for Quest 2 for maximum immersion.

The crown jewel of the Oculus Quest 2 improved specs is its Snapdragon XR2 chipset, which is a three-generation leap from the Snapdragon 835 the original Quest used. 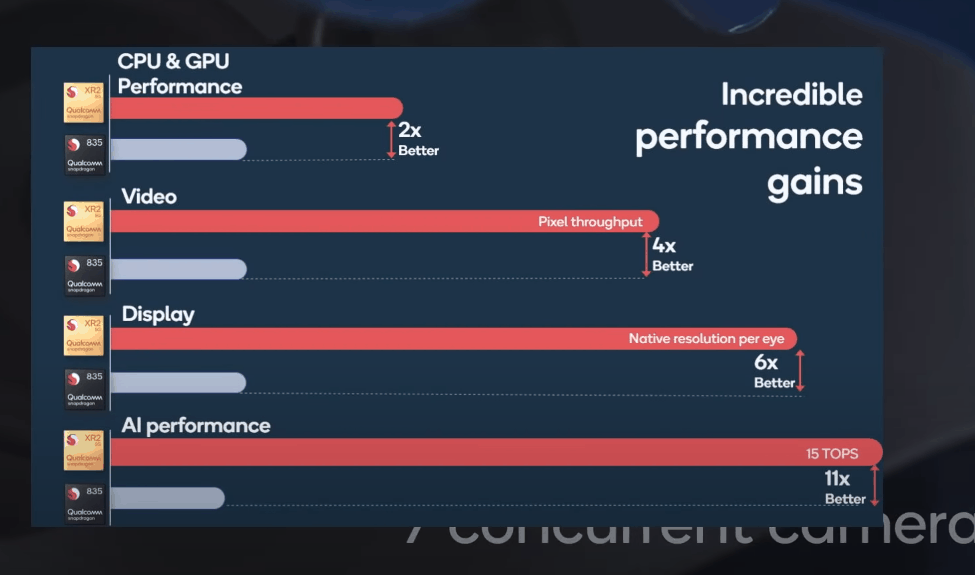 In addition to the above, the Quest 2 is equipped with 6GB of RAM which, when combined with the high-end chipset, opens up opportunities for creating more demanding VR applications in the future.

There are no hardware requirements to use Quest 2 per se, as the headset operates on its own.

The only thing you’ll need to set up Quest 2 upon shipping is an iOS 10+ or Android 6.0+ powered mobile phone.
To run PCVR applications using Oculus Link you’ll need a VR-ready computer with software similar to that used to run Rift S applications.

Comfort is probably one of the few areas where the Oculus Quest comes up a bit short.
Although the headset is almost 10% lighter than its predecessor (503g vs 571g), it seems like the drop in weight was achieved by replacing the comfortable Quest 1 strap, with a lighter albeit less convenient version.

Facebook addresses this issue by offering three native modifications. The “Elite Strap” is superior to Quest 1’s default strap in terms of comfort and weight distribution, but will cost you an additional $49.

The Quest 2 accessories in the Oculus Store are:

Oculus Quest 2 is a 6-DOF (degree of freedom) headset, which means it effectively tracks any hand movement you perform in virtual reality (apart from when controllers are in the blind-zone behind your back which is a similar issue with every inside-tracking headset on the market). 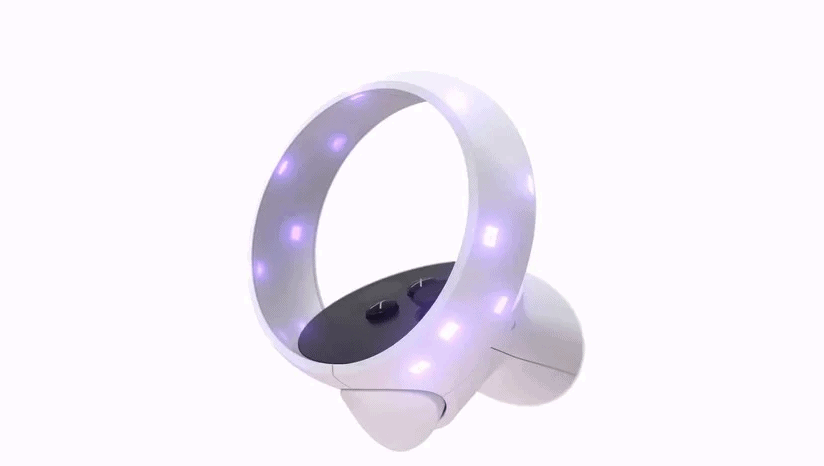 Oculus Quest 2 features inside tracking with four tracking cameras and doesn't require any external sensor stations to track your movements as Valve Index or HTC Vive Pro headsets do.

The controllers that Quest 2 sports are redesigned Oculus touch controllers with optimized haptics and more efficient tracking, as compared to its predecessor. They feel a bit more heavy, and provide a better feeling of hand presence. Compared to the original controller, however, the new ones have larger grips which might be a minor issue for users with small hands.

Lastly, Quest 2 controllers have slightly longer battery life and are powered by the same AA batteries as originals.

Oculus Quest 2 supports every app and game from the original Quest content library. As already mentioned, it can also run Rift S applications using a gaming PC and Oculus Link.

The content library for the Quest significantly expanded over the last year: while 5 months ago only 10 VR app developers were making more than $2M in revenue, currently there are over 35 Quest titles that generate revenue in millions.

With upcoming new games such as Assassin's Creed, Splinter Cell, Jurassic World, and Star Wars coming to the platform, the Quest platform is quickly becoming one of the most content-rich VR platforms on the market.

During the latest Facebook Connect 7 event, the Facebook team already announced active development of several non-gaming applications such as a cross-app fitness tracker and enterprise-centered infinite office to attract a wider non-gaming audience and extend the number of practical applications for Quest 2.

One of the most highly discussed topics with Quest 2 is the mandatory use of a Facebook account in order to operate the headset.

Android users won’t be able to side-load VR-optimized Android apps without supplying a working phone number or a credit card to the platform.

How Does Oculus Quest 2 Compare to HP Reverb G2?

Recently on our blog we’ve covered everything there is to know about the upcoming HP Reverb G2 headset and whether it’s going to disrupt the VR headset market.

Both Quest 2 and G2 are set to release in the fall of 2020, so naturally, customers are trying to decide which one is better for them.

Let us be quick about it.

If you have a gamer PC, enjoy deep and high-end VR experience with superior graphics and audio, and don’t mind that your headset connects to your PC by a cable, go for G2. For people sensitive to data sharing, the Quest 2 requirement to have a Facebook account, may be a deterrent.

If you are looking for an easy and inexpensive way to get a full VR experience, don’t have a high-end PC, and don’t mind connecting with a Facebook account, then Quest 2 would be a perfect choice for you.

According to Facebook, the release date for Oculus Quest 2 is set for October 13th. Given the significant amount of pre-orders and the history of Quest headsets being sold “faster than Facebook can make them", you might end up waiting for a bit longer.

You can order Oculus / Meta Quest 2 on the official Oculus website or from retail partners such as Amazon, Walmart, Newegg, and others.

In the future, Circuit Stream is going to be hosting dedicated Quest and Quest 2 design and development workshops and courses. You can already check out the popular Design for Hand Tracking applications and VR Design Secrets workshops.