Even though Oculus Rift got overshadowed by his younger and more nimble brother Oculus Quest 2, it is still a popular PC VR headset.

With the Oculus Link, millions of Quest 2 users can now connect their headset to their PCs and enjoy a huge library of PC VR games. With the recent upgrade of 'Air Link' feature even the USB cable isn't necessary.

This means if you own an Oculus Rift, you have a perfect opportunity to build and test high-demand VR applications for an ever-growing base of Oculus users.

So it's imperative to know how to set up your Oculus Rift for developer mode.

Once in developer mode, you'll be able to start development in Unity with Oculus assets and test your apps on the go. So here's a short tutorial!

A couple of technicalities, in case you just ordered the Rift S and you want to use it for your gaming laptop - Oculus decided to put an USB port on one side of the cable (all good so far) and a Display Port in the end of the cable which of course is outdated and non-compatible for most computer's I/Os.

To avoid the issue, order a Displayport to Type-C adapter ahead of time. We recommend getting a Type-C instead of HDMI port adapter since most of the users report issues with HDMI adapters.

The setup process for Rift and Rift S is identical. Rift S is just an upgraded version with sharper LCD display.

Before you get started, Oculus does recommend checking out minimum system specifications for using Oculus Rift. Make sure you have adequate specs!

How to Prepare Your Oculus Rift For Development

At this point we are assuming that you've already used Oculus Rift before and are familiar with their core features such as the guardian system (where you trace the edge of your play area to stay within guardian boundaries while in VR), and have gone through the full setup already.

To create apps for the Oculus, you need a laptop/desktop computer, 1x USB headset cable, copy of Unity (previously known as Unity3D) and Oculus Integration package.

To start things off, Usman will be sharing our Oculus Rift set up video with Unity. Next, we'll go over a three step recap of the video and some common issues.

Once you've downloaded Oculus Rift software make sure you have the latest Oculus updates installed. Depending on the time of the setup, the Oculus software package is the size of 5GB and more.

If you're having issues with the initial setup, we recommend that you contact customer support at Facebook technologies. Some problems are trivial, for example, having sufficient disk space on your computer and making sure that your computer satisfies the minimum requirements such as graphics card or RAM for the best VR experience.(Check out our guide on VR hardware or check your desktop capabilities with the new device with SteamVR performance checker).

Now plug your Oculus Rift in your PC using a USB cable. Make sure you’re using a USB-C cable or Oculus Link cable. In the following prompt, Allow USB Debugging and check whether Always allow from this computer is on.

According to the Facebook guidelines for Oculus users, everyone who uses previous generation Oculus devices for the first time will need to log in with a Facebook account. The guidelines were introduced in October 2020.

If you want to use Oculus Rift exclusively for development purposes without accessing content from the Oculus Store, you have a choice: either connect your development account to your personal Facebook or set up a Test User account to test your VR applications.

We're going to start by downloading the newest version of Unity engine. Install Unity on your computer by running the installer package and following simple instructions. Once you have Unity installed, create a new 3D project by clicking File > New Project. Name your project, select 3D from the Template dropdown menu and click Create. 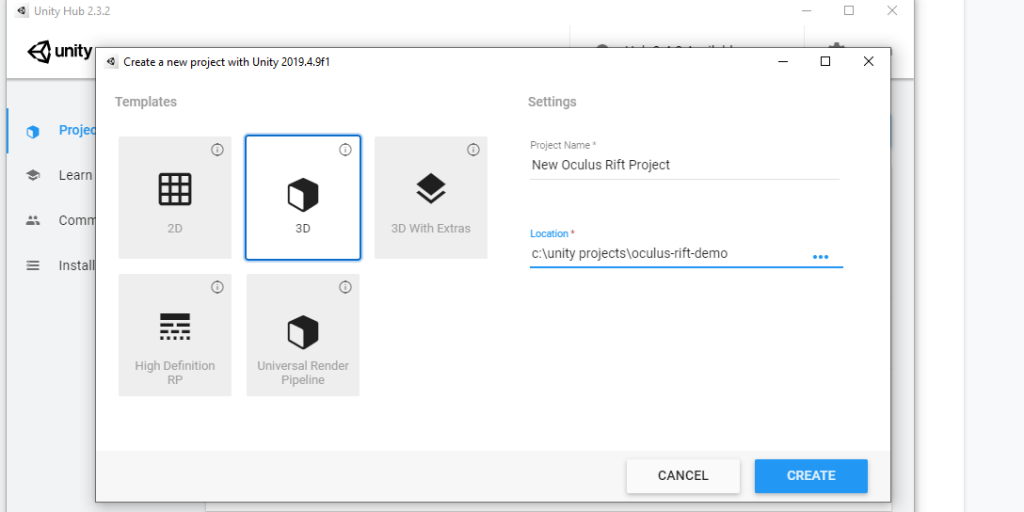 Once you’ve created the new project, click on File then Build Settings. Let’s go through a couple of settings here:

Follow the screen instructions: click on the Asset Store tab (Window > Asset Store) and search for “Oculus Integration” at the top. 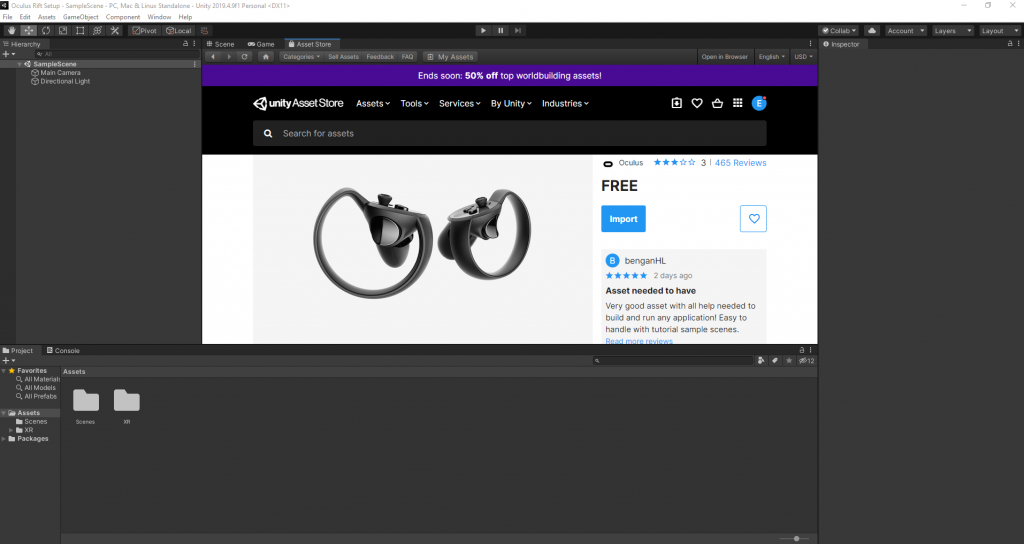 First, you need to download the package. After that proceed by clicking Import in the Asset store. To finish the import, click the Import button as shown below: 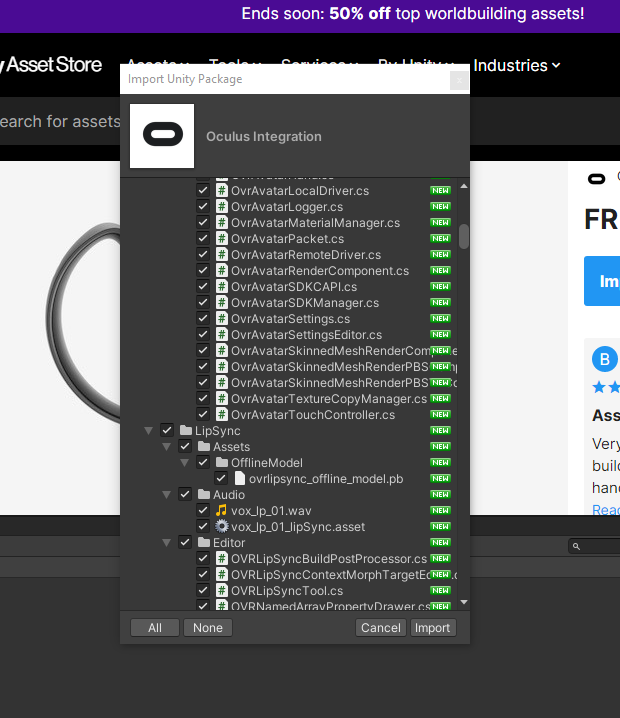 After that the Oculus Integration package will be imported into our current project.

Now we can use Oculus package components and assets to quickly set up our Virtual Reality environment.

Let’s start with setting up Oculus Camera that represents the position of VR headset and your players’ eyes.

Step 4: Set Up The Camera (OVRCameraRig and Main Camera)

In your Assets tab, navigate to Oculus > VR > Prefabs.

From there, click and drag the OVRCameraRig prefab into your scene.

Your project is now acting funny as there are two different cameras in one scene. The default Main Camera and the OVRCameraRig that we’ve recently added. Delete your original Main Camera in order to avoid conflict with your newly imported OVRCameraRig.

Browse your Hierarchy tab and find the Main Camera object, then right click on it and select Delete. 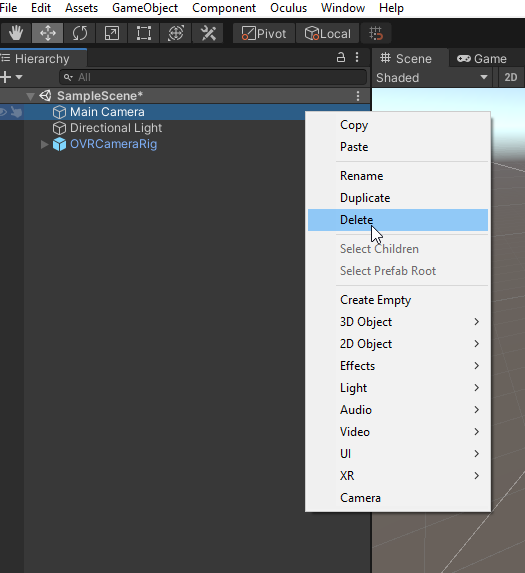 Now that we got the Main Camera out of the way, let’s set up our OVRCamera Rig.

Click on the OVRCameraRig in your Hierarchy tab. Then, take a look in the Inspector tab on the far right of your screen for Tracking Origin Type in the OVR Manager (Script) component. Click the Tracking Origin Type property so a drop down menu appears, and select Floor Level.

By doing this we are fixing the user's position and orientation relative to the floor. The position in VR is calculated based on the user’s height which they indicate when setting up their Rift device.

In other words, regardless of the users of your app, it will adjust to fit every one!

Now that we’ve set up our camera, we need to set up the controllers to represent the player’s hands.
If you want the player to use their Oculus Avatar hands, navigate to Oculus > Avatar > Content > Prefabs under the Assets panel

Drag the LocalAvatar prefab into your scene:

Done! Now that we have the controllers in the scene, your player will be able to interact with objects within the application you build. But we still need to make the controllers visible as avatar hands.

In your Hierarchy Tab, click the LocalAvatar game object. Then, check out the Inspector tab. Under the OVR Avatar (Script) component in the Inspector tab, find the “Start With Controllers” property and make sure it’s selected. 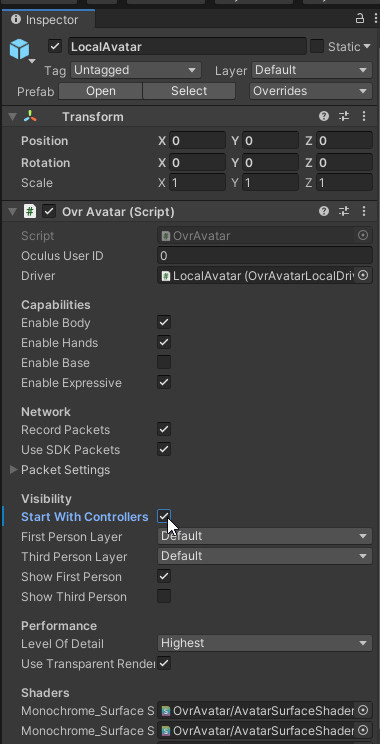 Save the scene. You now have a project that’s ready to develop for the Oculus Rift!

Turn on your Oculus Rift controllers and click Play in Unity.

You should be able to see your scene as well as your two touch controllers. If your scene doesn’t look like much, that’s because it isn’t at this point. Now that you’re all set up, it’s time to get building and turn that space into something incredible!

You should also see your controllers moving around in the Scene tab.

Before you move ahead with your project, make sure you’re familiar with the capabilities of your hardware. Start by checking out all of the button inputs on your controllers. You’ll find it has a range of input options that include:

As you continue to develop your scene, make sure you take advantage of the huge amount of resources at the Oculus Developer Center.

Remember, if you run into any trouble or need one-on-one guidance from Unity pros, you can always find it in our live 10-week course or 1-on-1 packages with expert AR/VR mentor.

Hide your cords out of your way and tighten your velcro straps. Unfortunately the wireless options for Oculus Rift HMD or Rift S. isn't available and Facebook hasn't updated the software for Rift devices in a while. Sorry.

If you can't see your Touch Controllers in the scene, and Unity is giving you an error in the Project tab, try these fixes:

For complete documentation check out www.oculus.com for oculus support. Looking to see other setup guides? Check out setup guides for Quest, HTC Vive or HoloLens 2.