What is Augmented Reality: The Guide to AR

Augmented reality, or AR, is one of the most exciting developments in modern technology, bringing virtual elements into the real world through apps and AR devices. But as the technology is still in its infancy, many people still confuse it with VR, which begs the question: what is augmented reality?

While they both involve smart glasses and virtual objects, as you’ll soon discover, AR is not the same as virtual reality. While it’s a topic of much debate, it could be said that AR applications are in the driver’s seat, showing much more promise for the future - but we’ll get to that later.

What is Augmented Reality?

Augmented reality is a technology that superimposes computer-generated layers of digital information, like graphics, images, or text, onto a view of the physical, real-world environment. In doing so, AR technology changes the perception of reality, making it more interactive.

How Does Augmented Reality Work?

If you’re unfamiliar with the development of reality applications in recent years, you may be thinking, “what is augmented reality -- just a fancy buzzword for virtual reality?”

No, let’s be clear about this point:

When you view our world through an augmented reality device, you are not completely immersed in an artificial environment as you are with virtual reality. Instead, AR technology adds digital elements on top of the image of our real physical world, creating the illusion that the 3D objects you see are now part of the real world surrounding you.

Unlike virtual reality, you don't need dedicated hardware to start using augmented reality because the former is available on smartphones, tablets, and handheld devices, as well as specialized head-mounted displays.

This widespread availability makes AR more accessible than VR for the everyday user. UX designers at the biggest technology companies in the world have discovered powerful ways of implementing applications of VR in military, medical, and manufacturing environments. So, as you may expect, VR headsets don’t come cheap.

By comparison, you can use AR on your smartphone. That being said, there are some incredible purpose-built AR glasses worth considering if you have deep pockets.

Let’s take a look at the best augmented reality devices money can buy:

If your business budget (or your wife) permits one splurge on futuristic tech, make it the HoloLens 2 from Microsoft. These AR glasses comprise an HD camera, a light sensor, several microphones, and a powerful Holographic Processing Unit, that makes it possible to interact with the holograms you see in the augmented world. It’s not perfect yet, but the second iteration HoloLens is pretty close, making it the undisputed king of augmented reality devices in 2020. 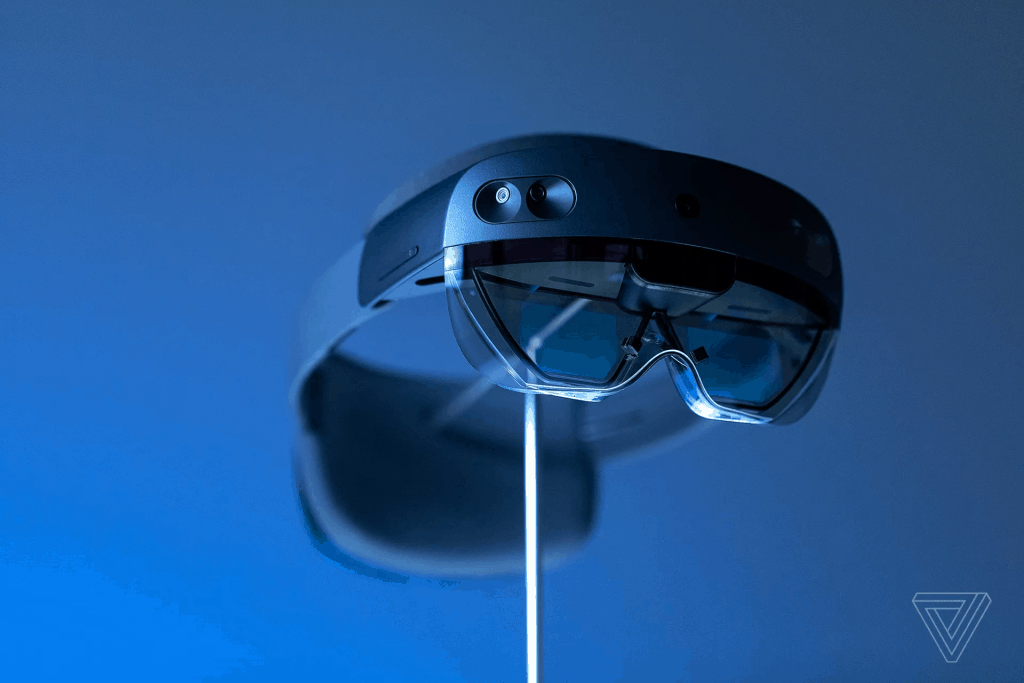 Magic Leap made waves in the startup scene when it raised a cool $3 billion back in 2018. Following a lengthy beta session, the company pivoted towards enterprises, offering its AR device, Magic Leap 1, to developers of “spatial computing”.

Unfortunately, the new buzzword didn’t have the desired effect, as early sales in the U.S. failed to hit the company’s lofty targets. As a result, Bloomberg reports the Florida company is considering a sale. 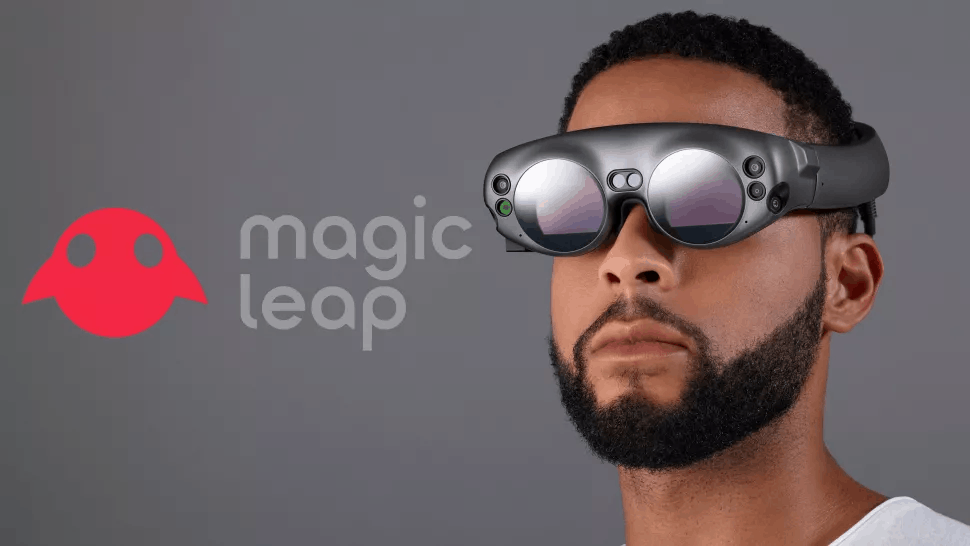 Google Glass appeared in 2013, offering users a revolutionary hands-free online experience, where users could communicate with the Internet through voice commands. Unfortunately, the project ran into murky waters when the question of privacy arose around the concept of capturing images of people without permission. 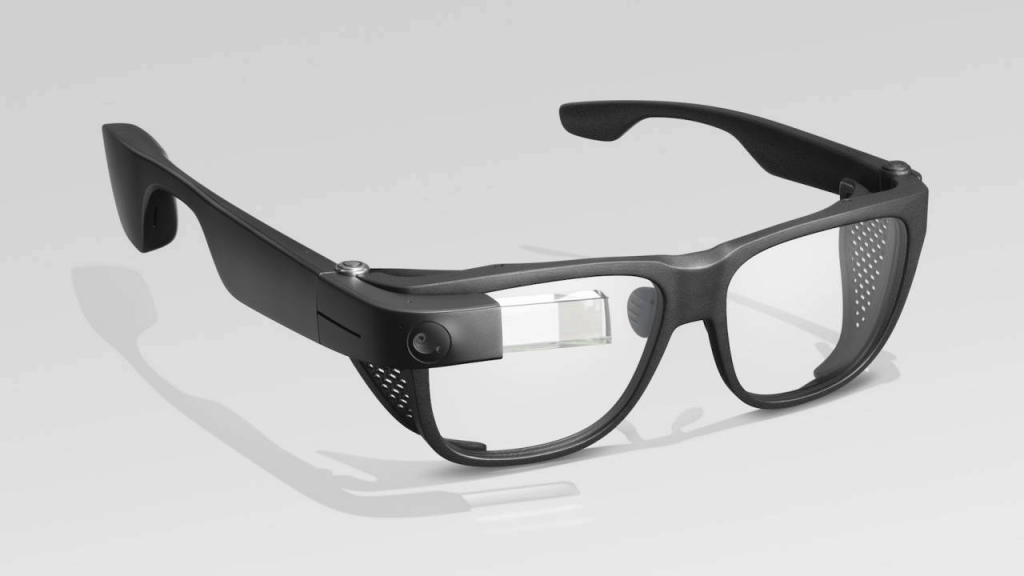 After a few years in the cold, the Glass project made an underwhelming return in 2019, with the Enterprise Edition seeking to crack the AR market. However, it seems the upgrades are minimal, and Google continues to miss the point of augmented reality, as the latest offering is little more than a chance for users to wear their smartphone on their face.

The Moverio BT-300 is the third version of Epson Moverio’s line of augmented reality glasses, and easily the best. Compared to its predecessor, the BT-300 glasses are lighter, and they come with an Intel Atom X5 processor that is better at rendering 3D images. Best of all, this device has excellent peripheral vision, so you can see objects beside you as you move, which makes for a more immersive user experience. 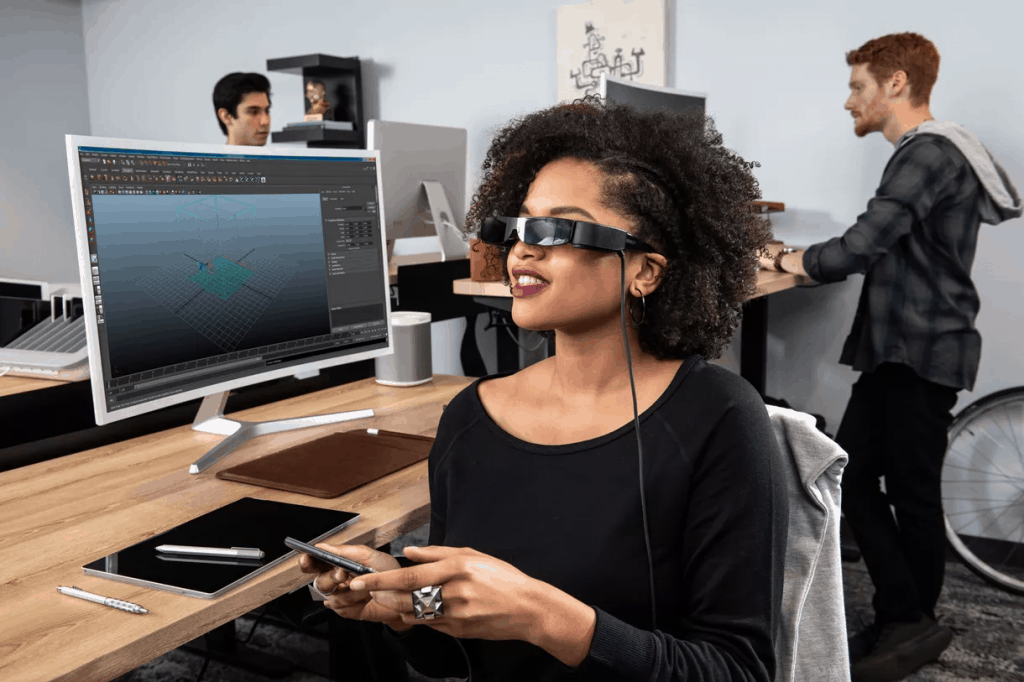 After Google left the party, Vuzix Blade AR stepped into the spotlight. One of the main selling points of this AR device is the central integrated display, which offers a better user experience compared to Google's independent display in the top corner. With Alexa installed, users can use voice commands and pair the glasses with their smartphone. 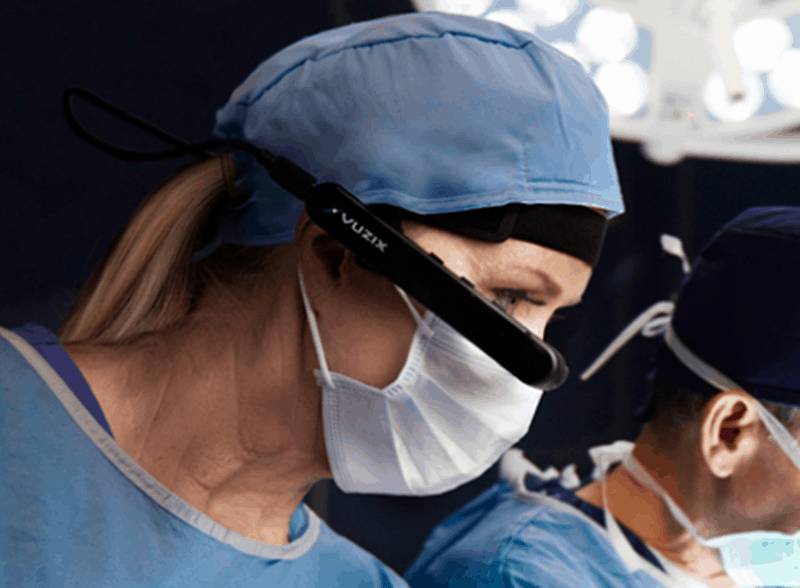 As testament to the prowess of Vuzix, it is being tested in the medical field as doctors battle against the coronavirus pandemic. The Vuzix Blade AR glasses work in tandem with Feevr, an AI-based system that can screen individuals in a crowd to detect those with an elevated temperature.

You can’t have a conversation about augmented reality without mentioning Pokémon GO. This legendary game by Niantic is so entrancing that people literally die to play it -- yes, literally. 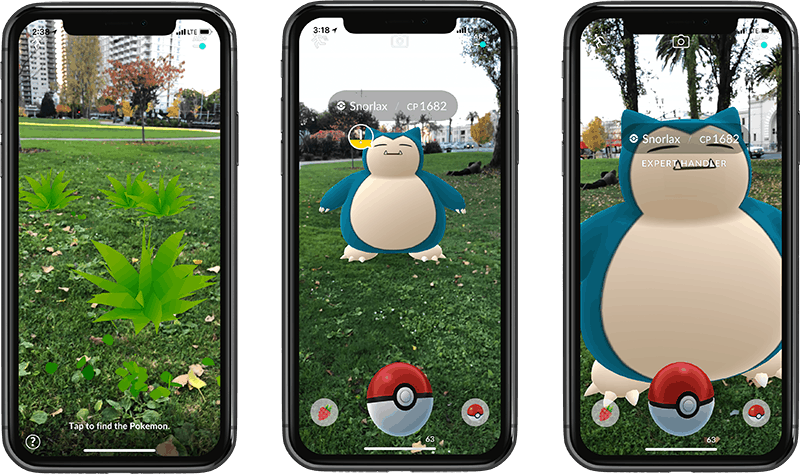 For the uninitiated, Pokémon are strange fictional animals that possess special powers, such as an electrically-charged mouse. The augmented reality game enabled mobile users to see these creatures in the real world, so they can chase and capture them for points -- even if it means running into traffic or off the edge of a cliff.

Unfortunate calamities aside, the success of Pokémon GO since its launch in 2016 brought augmented reality into mainstream consciousness.

Snapchat was around long before 2016, but the app that pioneered ephemeral video clips only adopted augmented reality in the same year that Pokémon exploded. Its patented Lens Web Builder made AR readily accessible to consumers, and more importantly, to small brands with limited budgets.

This clever pivot allowed Snapchat to remain competitive in the face of intensifying competition from Facebook, which had blatantly cloned the disappearing video concept with Instagram Stories. Now, small businesses can use AR to advertise products to the thriving millennial and Gen-Z audience that uses Snapchat.. 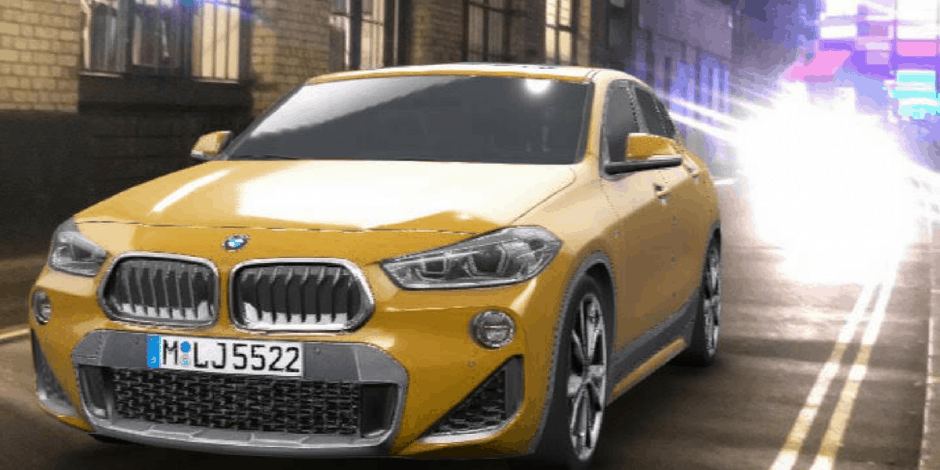 Whether it’s a BMW on your driveway, a Gucci bag on your desk, or simply a can of Pepsi in your hand, Snapchat is using augmented reality advertising to open the doors to exciting possibilities in visual commerce.

Have you always wanted a tattoo but just couldn’t make your mind up about what to get, or where on your body you should get it? It’s a tough choice that many people ruminate on for years before going under the needle. If so, you’ll be happy to hear what augmented reality can do to help you decide. 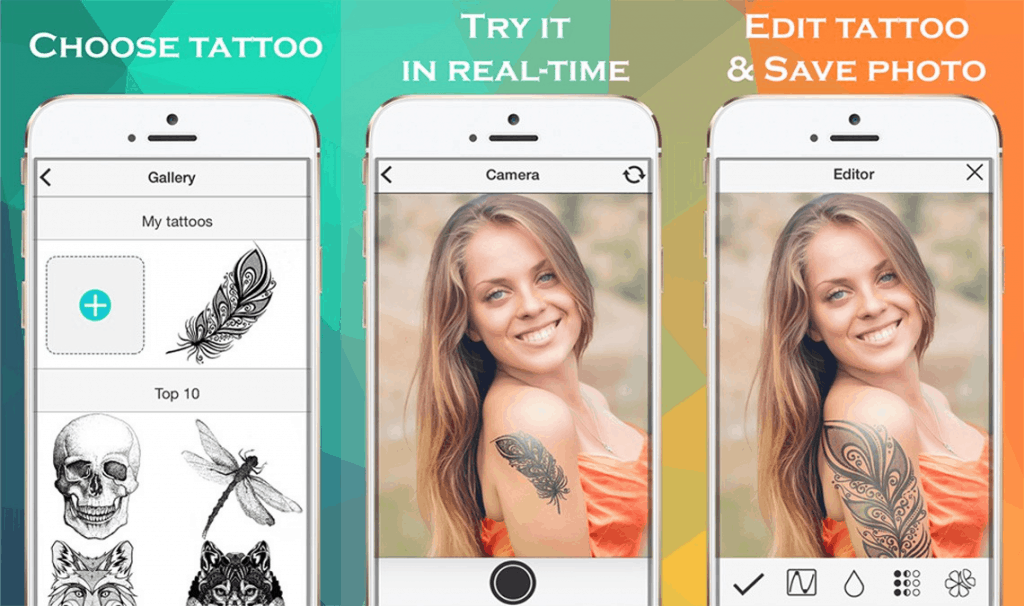 Ink Hunter is an augmented reality app that lets people “try on” different tattoos, which then can place and position anywhere on their body. Whether it’s a Celtic cross or tribal sleeve, you can find it in the built-in design library. There’s even an option to upload your own designs, so you can check out what it will look like before making it permanent.

The Swedish furniture manufacturer was an early-adopter of augmented reality, bringing the technology in so shoppers could visualize their new home through a mobile app. 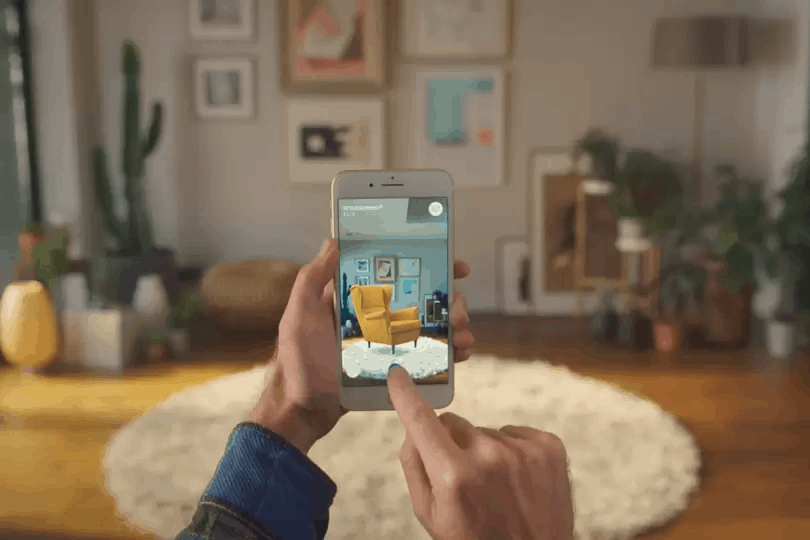 The IKEA Place app helps people make smarter purchases, as they can take their time in the superimposed graphics environment to figure out the right look for their home.

It may not be much of a surprise to hear that wiring aircraft engines can be a challenging and time-consuming task. However, what many people don't know, is that Boeing -- the biggest aircraft manufacturer on the planet -- uses augmented reality glasses to streamline engineering tasks, and ultimately, improve aviation safety. 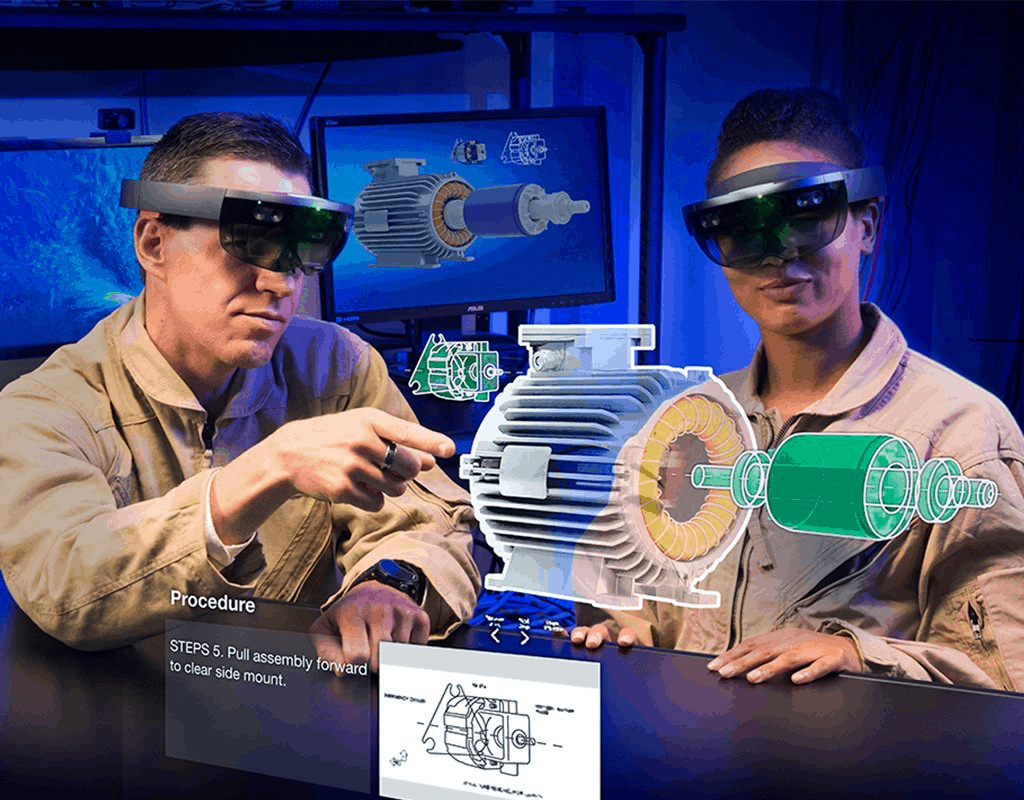 Proving that it’s much more than a novelty gimmick, Boeing engineers use the lamented Google Glass to manufacture the same passenger jet engines that people rely on to travel every day. Let’s just hope the engineers aren’t playing Pokemon GO at the same time.

While Glass may not be the best augmented reality device, Google continues to innovate in the field in other ways. One of the most impressive AR pursuits from this digital giant is the updates to the popular Google Maps service. 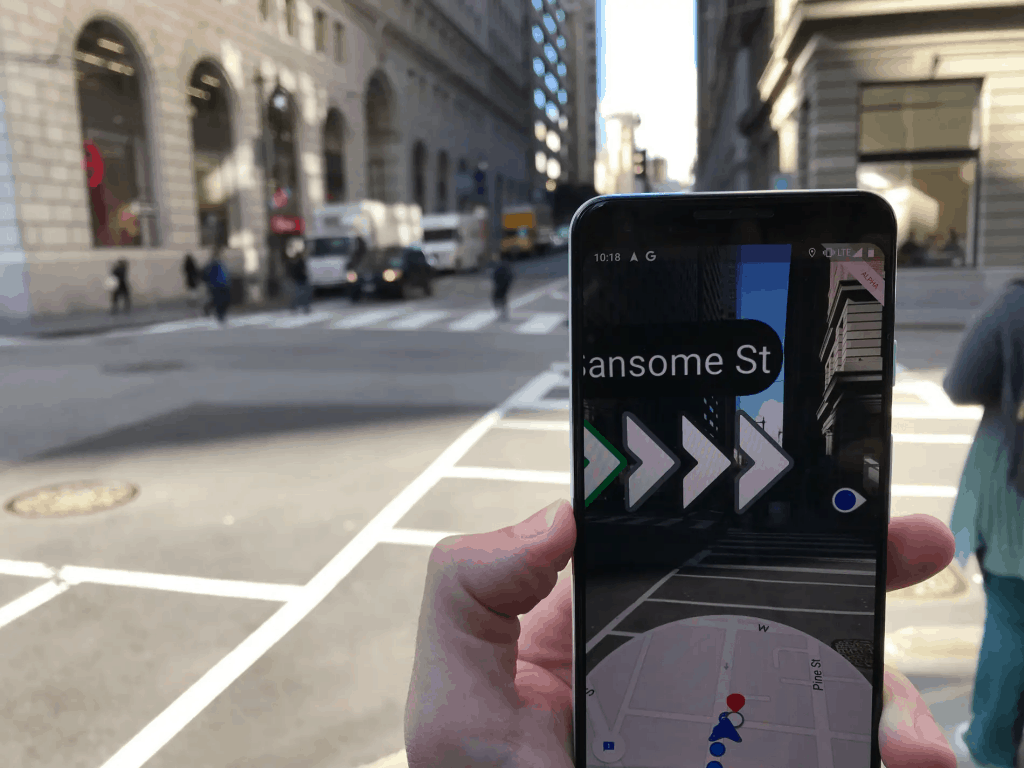 Now, Google Maps Live View is available on many Android and iOS smartphones, making walking around a new city more fun than before. With real-time navigation, you can use your phone’s camera to view arrows and integrated directions that guide you to your destination.

The Future of Augmented Reality Technology

According to Statista, 2.5 million augmented reality headsets will ship in 2020. By 2022, that number will increase twelve-fold to 30 million.

Snapchat CEO Evan Spiegel is going all in, vowing to integrate wearable AR devices into the company lineup within the next decade. The evolution of his company is already underway, with the launch of the third-generation Spectacles glasses in August 2019.

As mobile devices become increasingly powerful, with better cameras, 5G technology, and omnipresent WiFi, we are closing in on a future where augmented reality is commonplace. While AR glasses seem like a questionable fashion choice now, the trend is growing.

Once developers find ways to integrate smartphones and AR glasses in a seamless, user-friendly, cost-effective way, the future of advertising and customer connection will change forever.

If you're looking to start developing for augmented reality, visit one of our free Introduction to AR workshops, or request a syllabus for the XR Development with Unity course, where you learn all the fundamentals of AR and VR in 10 weeks.

Get the XR Development Program